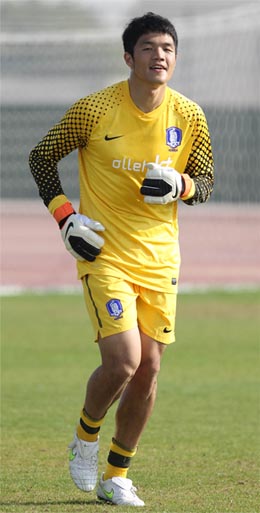 But that’s no longer the case.

Jung, 26, has since replaced Lee on both stages. Initially viewed as a backup to Lee, Jung started all four games for Korea at the World Cup as the country reached the round of 16 for the first time on foreign soil. Lee, 37, announced his retirement from the national team in August, further entrenching Jung as the go-to guy in net. Jung was the team’s undisputed No. 1 goalkeeper in January at the Asian Cup, where Korea finished third.

Last month, Lee, considered in the twilight of his career, was not retained by Suwon, a team he played on for more than a decade, and he instead signed with the Chunnam Dragons.

His replacement in Suwon is none other than Jung, who moved in from the Seongnam Ilhwa Chunma as one of the most coveted free-agent signings this offseason.

“A lot has happened to me since last year,” Jung told reporters with a smile.

“This was my second transfer in my professional career,” added Jung, who debuted with the Pohang Steelers in 2003 and was then dealt to Seongnam in 2008. “The key is to forget about all the pressure to perform. I know I have to do well with my club to excel on the national team, too.”

At the World Cup, then-head coach Huh Jung-moo opted to go with Jung over World Cup veteran Lee. Jung blanked Greece 2-0 in Korea’s opening match, and the changing of guard was all but complete.

Even though he replaced him on the national and local stages, Jung said he speaks to Lee regularly for his advice.

“We talked on the phone a few days ago, and he asked me how I was doing with the new team,” Jung said. “He said we should both play hard and push each other this season.”

Jung knows he has a tough act to follow in Lee.

With Suwon, Lee won four K-League championships, two FA Cups, four K-League Cups and one Asian Football Confederation Champions League title. Lee was the K-League’s most valuable player in 2008 and played 132 international games for Korea, the most among Korean goalkeepers. He was an integral part of Korea’s dramatic run to the semis at the 2002 FIFA World Cup, co-hosted by Korea and Japan.

“Woon-jae accomplished so much both with Suwon and the national team,” Jung said. “I had a great experience competing with him for the national team starting job last year. I want to follow his footsteps and do even better.”

He’ll get a chance to move in that direction when the new K-League season gets started next weekend.