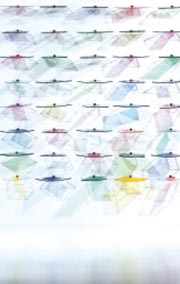 To March 14: In her solo exhibition, artist Lim Jeoung-eun plays with glass, light and silhouettes. The artist engraves cubic forms onto glass, installing them with light, mirrors or pictures to create a variety of images. Her works include both parallel plane and installation works.

The artist imbues transparent light with color, arranges objects into symbols and ultimately transcends the boundary between the physical and the ethereal.

As an artist, Hong has dedicated her career to color field abstraction. Her works are represented by boldly repetitive patterns of triangles, crosses, four-leaf clovers and flowers, using vivid color composition.

The colors she uses seem to contrast yet remain clear at the same time. Her technique of mixing sawdust with paint adds texture while sharpening the contrasts between the colors.

Hong, who has been called an “alchemist of color,” used to depend on red, but in her “Nano” series she uses more flamboyant colors than in the past and has extended her palette to cherry pink, yellow and orange. 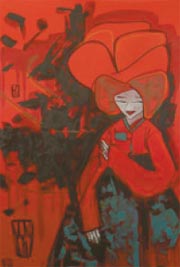 To March 25: The Youngeun Museum of Contemporary Art is running a solo exhibition of Venezuelan artist Cristina Nunez.

The 34-year-old artist from Caracas expresses Korean sentiments through the exquisite colors of Latin America. Nunez’s flower series, which is part of the exhibit, was produced during a residency in Korea.

The exotic colors and bold brush strokes in her still-life paintings are imbued with the atmosphere of Latin America.

In her work, Nunez portrays everyday life through simple lines and other symbols.

The artist made herself known in Korea via the Golden Eye Art Fair in Seoul in 2008 and the Manif Seoul International Art Fair in 2010.

She is currently participating in a short-term artist-in-residence program at the Youngeun Museum of Contemporary Art. 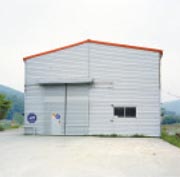 Friday to April 2: Gallery Plant is showing a solo exhibition of works by photographer Joo Hwang.

Artist Joo Hwang said that the project “Temporary Storage” explores the idea of what buildings mean to us.

Although temporary storage spaces are often regarded as hostile intruders in a pristine society, Joo regards them as symbolic of the severing of relationships in the modern world.

The exhibition is a collection of photographs of all sorts of abandoned storage spaces, which once held commercial products, that were located on the outskirts of Seoul and in the Gyeonggi area.

The dilapidated buildings made of steel and plastic clash with their new, more modern surroundings, creating a new yet familiar urban landscape.

The artist also insinuates that the warehouses, many of which used to function as small factories, have lost touch with the local economy because the operations once carried out by the factories have been moved to countries with cheap labor.

As a result, these temporary storage spaces, no longer used for production, have lost their purpose.