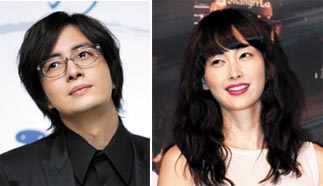 Top hallyu star Bae Yong-joon has once again denied all claims regarding a possible marriage between him and Korean actress Lee Na-young.

On Wednesday, Japan’s Asahi Weekly reported that the two celebrities would be walking down the aisle in April.

The report also contained comments from various sources saying the two had been seen visiting each other’s homes.

Bae’s management company, Keyeast, did not waste any time refuting the reports.

On the same day the Asahi Weekly article was released, the company sent a press release, saying, “We have already proved this rumor false in Korea.

We will prove it through our Japanese management partner and take a solid position on this matter.”

Rumors and the two actors’ romantic relationship began in Korea in 2008.

Bae has tried to dispel the rumors in the past.

During a meeting for fans held at the Tokyo Dome last year, he told the press that “Lee was just a co-star in a drama and I just have no clue where this kind of rumor came from.”

Lee has also refuted the rumors in interviews since 2008.

The two appeared together in the 1999 drama “Did We Really Love,” in which Lee played Bae’s younger sister.