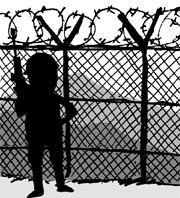 Adolf Hitler, who instigated World War II by invading Poland in September 1939, planned to invade the Soviet Union after putting Western Europe, with the exception of the United Kingdom, under its grip. In 1941, Germany reinforced its troops along the frontline bordering the Soviet Union and made reconnaissance flights into Soviet airspace.

Information on German movement was regularly reported to Joseph Stalin. Prime Minister Winston Churchill of the United Kingdom and President Franklin Roosevelt of the United States also warned Stalin about the possibility of a German invasion.

But Stalin ignored them. He strongly believed in the Treaty of Nonaggression between Germany and the Soviet Union that was signed right before the war broke out. He believed that Germany would not dare to provoke wars on the eastern and western fronts at the same time. He miscalculated, thinking that the United Kingdom and the United States would try to instigate a war between Germany and the Soviet Union.

On June 22 of that year, the German army invaded the Soviet Union. Soviet troops retreated repeatedly. Some 1,200 Soviet warplanes were destroyed even before having a chance to take off. In less than five months, the German army had advanced to the outskirts of Moscow. The enormous damage and humiliation that the Soviet Union suffered in the initial stage of the war was the result of Stalin’s miscalculations.

In a war, a moment’s decision determines the fate of a country. In 638 B.C. in China, during the Spring and Autumn Period, King Yang of Song fought against a large army of Zhou. Although his subordinates suggested a pre-emptive strike, he refused it on the grounds that he could not use mean tactics. In the battle fought after the troops of Zhou crossed the river, the troops of Song sustained a crushing defeat.

While inspecting the troops defending the western frontline on Tuesday, Minister of National Defense Kim Kwan-jin gave an order: “Don’t ask whether to shoot or not. Shoot first and report later.”

Sun Tzu said that military strategy is about deception. The enemy will not think lightly of us if we seem like we will retaliate. They will never be scared of an army that hesitates about whether to shoot or not, even after it is attacked. But I wonder whether we can trust the security of the nation to an army with orders to shoot first and report later.