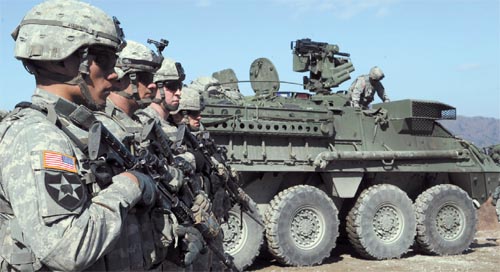 U.S. soldiers from Stryker Brigade Combat Team stand next to an armored personnel carrier with high-tech weaponry at Pocheon Firing Camp in Pocheon, Gyeonggi, yesterday, as they take part in the annual U.S.-ROK Key Resolve/Foal Eagle military drills that last through Thursday. The North threatened harsh action against the South prior to the joint drills, which began on Feb. 28. [NEWSIS]