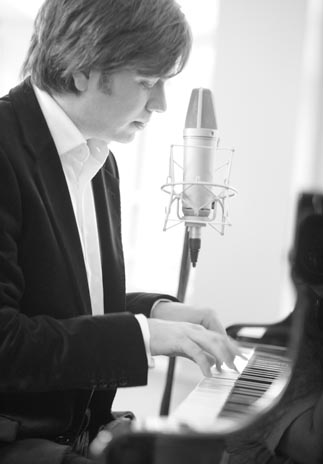 Pianist Steve Barakatt may not be a household name. But after listening to “Rainbow Bridge,” a romantic, mellow instrumental piano piece that has been featured in numerous television commercials and dramas, the Canadian crossover composer-pianist might seem more familiar.

“Rainbow Bridge” is a piece Barakatt created after being overwhelmed by the suspension bridge of the same name that crosses northern Tokyo Bay. The resulting composition is telling evidence of his affection for the country, where his music has long been popular. The 37-year-old musician has composed scores for major Japanese television dramas such as “Kiss Again” and “Shitteru Tsumori.”

But his popularity is not limited to Japan.

Koreans are mostly familiar with Barakatt though his compositions for Korean films and dramas and Korean fans place his music in a league with other new-age pianists who have become popular here including George Winston and Yuki Guramoto.

The pianist returns to Korea this weekend on Sunday and Monday for two concerts celebrating White Day, a romantic day for couples that originated in Japan and falls a month after Valentine’s Day.

It will be his second visit following his first in December 2006.

At this concert, which takes place at Seoul Arts Center, he will be joined by John Park and Kim Geu-rim, two of the 10 finalists in the second season of “Superstar K,” a reality cable TV show that is similar to “American Idol.”

A week before his arrival in Seoul, Barakatt had an e-mail interview with the Korea JoongAng Daily. The following are excerpts from the interview.


Q. You have been recording since you were 14. How did being famous at such a young age affect your life?

A. Being an artist at an early age is of course a challenge. I had to deal with many things and it is true that the spotlight makes you different. I always tried to stay grounded. In fact, my passion for music and my desire to always evolve have made me down to earth.

It seems like you are more famous in Asia than the West. What aspects of your music do you think make this possible?

Well, I can say that if my music touches Asian people, it is probably because I am also touched by Asia and its people. When I visited Asian for the first time in 1995, I was 22 years old and really felt attracted. I think I have the Asian sensitivity in my heart and it is reflected not only in my music but also in my relationships with Asian people. Maybe it comes from my Lebanese roots? After all, a part of me is Asian... I love Asia, its people and its vitality.

Where do you get the inspiration for your compositions?

It is still a mystery for me. I think that to be aware of what happens around us is certainly a good way to have more inspiration. I am fascinated by people and their stories. I try to appreciate things around me. I would say that the best composers are probably the ones who capture the emotions around them and put them into their music.

How would you characterize your music?

I consider myself a melodist. My passion is for writing melodies, and then I produce a rich musical environment around the melodies in order to create an imaginary world.

You were appointed a Unicef Canada Ambassador in 2007 along with your wife, Olympic gymnast Elena Grosheva. How did that come about?

My first collaboration with Unicef was in 2006 when I was artistic director of a James Bond gala event in Quebec City. The event was a benefit for Unicef and I had a chance to collaborate with Unicef Goodwill Ambassador Sir Roger Moore. After spending a few days with Sir Roger and Lady Kristina, we both felt inspired, and they also felt that we could make a difference on a bigger scale, coming from the music and sports worlds with international backgrounds. And the most important thing was the desire to help the world’s most vulnerable children. A few months later, Unicef Canada asked us to become Unicef Ambassadors and we accepted.

You are known as a new age artist, but are you interested in other genres of music?

I am very open in terms of style. I love combining classical and modern instruments. Sometimes I also use new technologies as well as traditional instruments.

What do you think about being labeled as an easy-listening musician?

The best communicators are usually the ones who make their messages clear. To be understood and felt is certainly the biggest challenge faced by communicators, including composers.

It could be worse; I could be tagged as a “difficult-listening” musician... I would be retired already. Who wants to suffer?

Tell us about your most memorable concert.

Each concert is memorable! Last year, I participated in the Levis Jazz Festival and I really had a great time. I love to improvise and I felt really connected with my band and the public, too. Jazz music fans are usually very open-minded and I explored a lot of different avenues during the concert... I really loved it.

Have you listened to any Korean music?

Yes. I’ve had a chance to attend a few Korean traditional music concerts. I’ve also composed music and collaborated with Korean pop artists (Wheesung, Sun Min, Richard Yongjae O’Neill) and I liked these experiences and the artistic results . . . I think Korean artists have a very good soul in music.

John Park and Kim Geu-rim will appear as guest artists at your upcoming concerts. Had you ever heard of them before now?

I saw videos of them and they are very energetic singers. I look forward to play music with them!