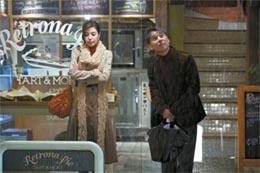 Home shopping model Sang-yeol (Im Chang-jeong) leads a regular life until he starts working with lingerie model So-yeon (Kim Gyu-ri) and develops a crush on her. So-yeon, with her femme fatale looks, ignores Sang-yeol. Then one night the two spend a night drinking together. The next day, Sang-yeol awakens to find So-yeon on his doorstep with the news she is pregnant with his child. 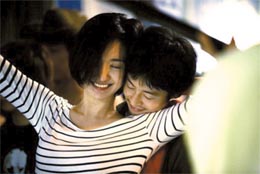 “Drifting Away” follows Chan-yeong (Lee Kyeon) and Dan-bi (Ko Joon-hee), both of whom are musical theater actors. Chan-yeong is shy and naive and Dan-bi is confident yet elusive. When they are cast as the romantic leads in a play, they fall for each other on stage and off. 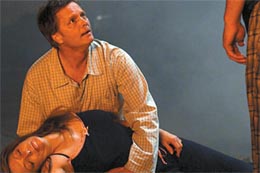 In the third movie in the “Butterfly Effect” franchise Chris Carmack, who started out as a regular in the O.C, plays Sam Reide, a time traveler who goes trawling through the space time continuum to help the police solve unsolved murders. Reide needs only to think of a particular time and place during his lifetime to be transported back there, where he witnesses murders and reports the identities of the bad guys to the police. But is Sam is about to break one of the cardinal rules of time travel and interfere with his own past? The sister of Sam’s murdered girlfriend turns up and tells him that she believes the man about to be executed for her sister’s death is innocent. Should Sam go back and try to save a potentially innocent man and risk changing his own present or not? Fans of the first two films in the franchise might like this one, but no promises.

“The Fighter,” directed by David O. Russell and nominated for seven Academy Awards, is a moving feel-good boxing flick that’s based on the true story of Micky Ward (played by Mark Wahlberg).

Set in the dying city of Lowell, Massachusetts, in the early years of Ward’s boxing career, the movie at its core is the age-old tale of an underdog overcoming great obstacles. But “The Fighter” is also more - with satisfying heaps of romantic love as well as brotherly love in this familiar yet original boxing story.

Melissa Leo plays the brothers’ mother - a role that garnered her Best Supporting Actress at the Oscars. 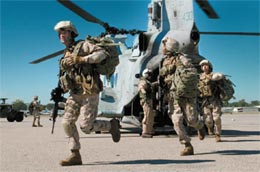 In a nutshell, aliens invade Earth, people freak out and the protagonist tries to save mankind. But perhaps that’s too flippant. In “Battle: Los Angeles,” retitled “World Invasion” for the Korean market, multiple sightings of UFOs around the world (including Seoul!) finally culminate in an actual alien invasion. The last remaining world city, for some reason, is Los Angeles, where a Marine staff sergeant (played by Aaron Eckhart) goes with his men to try and save mankind from annihilation.

Jonathan Liebesman, who directed the film, really likes shaky cameras, apparently, and it shows here as the audience is led through the epileptic generic action flick.

Aaron Eckhart and his chin might be able to save the world in the movie (the ending hints at a sequel), but the duo can’t save the movie from receiving a giant yawn and a shrug from most critics.

Devastated by the death of his son Ki-tae (Lee Je-hun), Ki-tae’s father (Jo Sung-ha) starts to investigate his son’s short life. The first thing he does is rummage through his son’s drawers and finds a picture of Ki-Tae and his friends Dong-Yun (Seo Jun-yeong) and Hee-Jun (Park Jung-min).

When he finds out that one of the boys transferred to another school and the other doesn’t show up at Ki-Tae’s funeral, Ki-Tae’s father becomes suspicious.

“Children” is based on a true yet unsolved murder case from the early 1990s that is known among Koreans as the “disappearance of the frog children.” In 1991, five elementary school students told their parents that they were going to hang out on a nearby mountain to catch frogs. They never came back.

In the movie, a television producer, the devastated parents of the missing children, a professor and a detective all take different stances on the case and in the end one of the parents becomes a primary suspect. In reality, the case morphed into a national scandal.

Director Lee Kyu-man, a rising star in the Korean film industry, presents a compelling picture of the case.

But just as the case hurt the parents in real life, the movie could touch off nerves - especially because the film depicts the parents as primary suspects in the case.

Audiences familiar with the case may have a difficult time with the plot, which gives the story a fictional ending even though the case remains unsolved.

Directed by Lee Yoon-ki, “Come Rain, Come Shine” takes the audience through every move and emotion of a couple on the verge of divorce. The man (Hyun Bin) has been married to his wife (Lim Soo-jung) for five years. (Their names are never mentioned in the film.) He’s a handy architect and a good husband. He cooks her pasta and brews her coffee just the way she likes. But he is also fainthearted and timid, and can’t seem to tell his wife “No.”

One day, the wife tells her husband that she wants to leave him for her new boyfriend. All he can muster is “Oh, I see.”

Then we’re brought forward 72 hours to the day of their separation and the woman is filled with anger at his behavior in light of the situation. When he continues to give passive responses she snaps. Yonhap