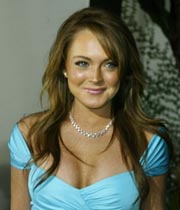 LOS ANGELES - Actress Lindsay Lohan will not accept a plea deal that includes a guaranteed jail sentence when she returns to court on Thursday, a source close to the actress said.

The “Mean Girls” star is due back in court Thursday morning to tell a judge whether she intends to accept a deal in a felony grand theft case filed over a necklace reported stolen by an upscale jewelry store.

The source told The Associated Press of Lohan’s intentions on condition of anonymity because of the sensitivity of the case.

Lohan has pleaded not guilty to stealing the $2,500 necklace from Kamofie & Co., a jewelry store near Lohan’s Venice home.