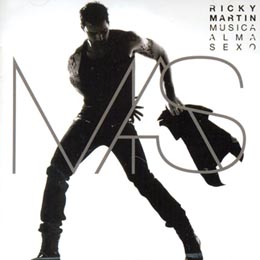 Ricky Martin is making a comeback to the music scene following a six-year absence, with his ninth studio album, “Musica + Alma + Sexo” (or “Music + Soul + Sex). The title really says everything about the album. Most of the songs are passionate and certainly have Latin flavor. But one song - really two versions of the same song, one in Spanish and one in English - was particularly notable. “Lo Mejor de Mi Vida Eres Tu,” or “The Best Thing About Me is You,” is a sweet duet with Natalia Jimenez in Spanish and Joss Stone in English. The mellow and slightly reggae-influenced beat is certainly a surprising turn for Martin.

The rest of the album is comprised of club music that is not so different from Martin’s original style. The song “Mas” has an upbeat sound drenched in electronic arrangements.

For Ricky Martin fans, the album should make a good addition to the collection, but none of the songs are likely to achieve the success of “Livin’ la Vida Loca.”