Our duty: To protect Mother Nature

Our duty: To protect Mother Nature 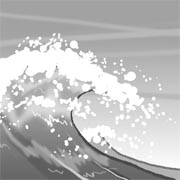 In 1944, at the height of World War II, an ingenious project for the development of a weapon was under way at a place called Shakespeare Park on the Whangaparaoa Peninsula at the northern tip of New Zealand, which was named after the family that developed the area in the 19th century.

The government project went by the code name of “Project Seal” and aimed to develop a “tsunami bomb” that could create an artificial tidal wave. The goal was to wipe out Japanese troops deployed along the South Pacific. Although the U.S. government was very interested in the project, it was never used because the war ended.

Tsunami means “harbor wave.” The waves created by an earthquake deep in the ocean do not harm small boats because they rise only about 30 centimeters (12 inches). But they move at a speed of 700 kilometers per hour. When they arrive at shallow shorelines, the waves rise up over 10 meters (33 feet) high and become killer waves, although their speed is slowed. It was in 1946 that the word “tsunami” was first used internationally. In that year, tidal waves that started in the sea off Alaska claimed the lives of 100 people when they arrived in Hawaii, some 4,000 kilometers (2,485 miles) away. Reports in the international media said that Japanese immigrants there called the waves “tsunami.”

There have been many large-scale disasters caused by tsunamis - such as the Ansei-Nankai earthquake in 1854, when more than 80,000 lives were lost, and the eruption of the Krakatoa volcano, which claimed the lives of more than 36,000 people in 1883 by creating waves over 30 meters high. But they pale in comparison to the 2004 tsunami in Indonesia, which cost the lives of 230,000 people.

After that, the UN Environment Program launched a large-scale study on tsunamis. One of the conclusions drawn was that coral reefs and coastal forests help prevent the damage caused by tsunamis. Since then, countries that have experienced devastation from tsunamis, including Indonesia, have begun to plant mangrove trees along their shorelines and initiated campaigns to protect coral reefs.

Human beings have tried to exploit natural disasters for their own interests, as they did in the Project Seal experiment. But Mother Nature silently protects human beings, which should remind us to protect her in return.