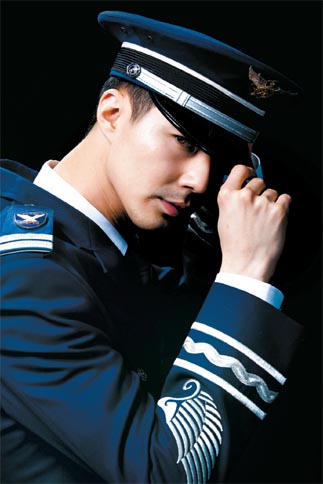 Zo In-sung was one of Korea’s most famous actors before he enlisted in the Air Force in 2009. He completes his service on May 4. By Park Jong-keun

As Korea’s most famous contemporary actor, Hyun Bin, began his mandatory military service two weeks ago, another popular actor, Zo In-sung, was counting down the days to the end of his Air Force service.

The sergeant had a serious demeanor in a recent interview with the JoongAng Ilbo. The actor quoted the Chinese philosopher Mencius (372 B.C.?289 B.C.) to reveal his views on life and talked about the enlightenment he gained in the military. During his military service, Zo said he learned “the wisdom of life.”

For the man that started the “flower boy” look - a social trend in which being pretty was incorporated into women’s concept of handsome men - quoting a Buddhist philosopher was a surprise.

Zo was one of Korea’s most famous actors before he began his military service on April 6, 2009. His years in the barracks were not wasted, he said, but were a period of rejuvenation. He completes his service on May 4.

The JoongAng Ilbo interviewed Zo on March 7 in Osan, Gyeonggi.


Q. How has the military changed you as a human being?

A. I take a lot of questions like that. In fact, I will only realize what I have learned after I go back to society.

Are you being modest or just watching your words?

If I said that the military completely transformed me, it puts too much pressure on those who are about to enlist.

How did you adapt from your schedule as a star?

I am in an Air Force band. While standing on stage, I am evaluated based on how disciplined I am. The truth is, an entertainer should have a high standard of morality. I got used to it, so there was no problem.

Have you been beaten in your time in the Air Force?

There is no harsh treatment or beating [in the Air Force]. These days, the military police check out every incident. All senior soldiers including myself, try to resolve things rationally.

Bathroom cleaning. There were two other colleagues for rookie training. Those who are relatively old are assigned bathroom cleaning. Afterwards, you get “promoted” to a laundry room then a shower. I’ve become a master cleaner. After serving in the military, I think I can enter a grandiose bathroom and show the janitor what bathroom cleaning is all about: “This is not what cleaning is supposed to be.”

Some people say entertainers in the military don’t work as hard as everyone else.

There shouldn’t be exceptions for anyone. I cannot behave in such a way out of shame. I tried to act like an ordinary person, but some people could not perceive me like that. It’s a burden I’ll have to shoulder my whole life.

There are a lot of entertainers that become “entertainment soldiers” for the Defense Media Agency [when they enlist for their military service]. But I wanted to get on with ordinary guys. In fact, I am quite good at that. We tried to mingle together, taking care of each other when somebody got sick, for example.

Hyun Bin joined the Marine Corps today. Do you have advice for him as a senior soldier?

I hope he “behaves himself with discernment and wisdom.” It is a quote from Zheng Min of “Greater Odes of the Kingdom” in the book “Shi Jing.”

How did you feel when the Yeonpyeong Island attack occurred?

I felt a sudden surge of emotion. I became truly overwhelmed with anger. I did not want to forgive those who destroyed Yeonpyeong Island like that. At the time, an F-15K was in the air, which has the capacity to strike a target several hundred kilometers away. I had an urge to tell everyone about our mighty planes.

How do you spend free time?

Whenever I have spare time, I read. One book I read recently was “Walden” by Henry David Thoreau. I chose it because the late Venerable Beopjeong recommended it.

Unforgettable memories in my military career have been reading the “Four Books and Three Classics” [of ancient China]. One day out of the blue, the book “Mencius” popped into my head. It was strange enough, but I told myself, “Let’s just give it a shot.”

I felt so refreshed. Next, I dove into “Confucian Analects” [the representative work of Confucianism]. I went further, reading “Doctrine of the Mean.”

Do you have plenty of time to read in the military?

It is a rare combination to mix Zo In-sung and the “Three Classics.”

There were always so many things going on in my head, but it was hard to put everything into words.

I could experience catharsis once I read “Mencius.” It manifests what I tried to deliver and how I wanted to live. The book also seemed to suggest which route I should take in life.

Did you also read a lot before you joined the military?

To confess, I only read scripts. I fell in love with reading after finishing an essay collection by Kenzaburo Oe [titled “A Man Recuperating” in Korean]. I felt recuperated, rejuvenated.

Due to my face, people tend to judge my appearance before they see me in action. I have devoted myself not to be evaluated by my appearance. That fact made me choose intense pieces; ones that are strong and fierce.

Are you protesting your appearance?

Not at all. It’s who I am. However, I came to feel a bit differently nowadays: I should make the best use of my appearance, which my parents passed on to me.

You have been chosen the most anticipated actor to complete military service. Why do you think people have such expectations?

I appreciate having such opportunities. People have certain expectations.

Do you have a method for acting?

I am a method actor. It is the actor’s ability to throw himself into a role as if he is who is playing.

If a role does not make sense to me, it is hard. That’s why I see severe fluctuations in my acting.

What does that mean?

For example, if there are scenes making me feel abashed, it should be understood in a broader context. Sometimes, I quibble with scriptwriters or directors.

In “What Happened in Bali” I could understand the context.

Of course, I can act even though I don’t understand something. However, I cannot reveal that to the audience.

What do you want to deliver or gain through acting?

Taking the case of working with Ha Ji-won, her performance is stable and complementary to her counterpart. It doesn’t mean anything to shine all alone.

A great performer sets aside his or her own aura, while elevating a partner at the same time. It makes himself or herself shine further. Maybe life is similar to that. I would like to play supporting roles when I get older.

You are now in your 30s. Are you thinking about getting married?

I have to be self-sufficient, but maybe it is a matter of my personality. I find it too burdensome to meet someone as an entertainer. It is hard to reveal my real self.

What are you planning to do after completing your military service in May?

Traveling. I am eager to go to Europe again for sure. Actors should see as much of the world as possible. Acting comes from the sum of our experiences.

Do you have any comments for young people?

Actors work in an ensemble. There are almost 150 people including staff and managers [in productions]. It means that harmony is important. I have been learning that fact since I was 18. Life in the military was more of the same.

You try to understand, persuade, and people follow you. If you add a sense of responsibility, that would be the frosting on the cake.

A sense of brotherhood and harmony, I guess, are elements of leadership. I don’t think it’s only the case for the military.

It sounds somewhat paradoxical, but this is how I have been enlightened in the military barracks.