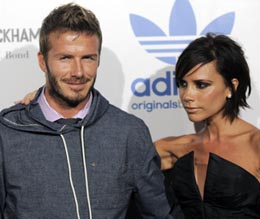 LOS ANGELES - British football superstar David Beckham and his former Spice Girl wife Victoria are expecting a baby girl in July, a spokesman said Monday. The couple announced in January that she was pregnant with their fourth child, but did not give the due date and gender.

Beckham’s Los Angeles spokesman Jeff Raymond confirmed press reports that “Goldenballs” - Victoria’s pet name for Beckham - will get a daughter to go with their three sons Brooklyn, Romeo, and Cruz.

“Obviously, we’re very lucky to be expecting again, and this is the first time I’m going to say it: it’s a little girl,” Beckham was quoted as saying by British newspapers.