Montage of history and memory at the Leeum

Montage of history and memory at the Leeum 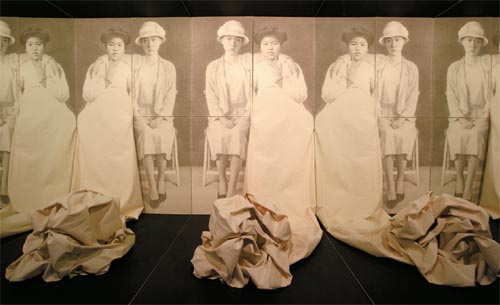 “Reflection Reflection” (2011) by Cho Duck-hyun, an installation that consists of a painting, mirrors and other objects, is on display at the Leeum, Samsung Museum of Art, as part of the “Korean Rhapsody” show. Provided by the museum


Dancer Choi Seung-hee and poet Yi Sang interact in a documentary that is now showing on a screen in a corner of Leeum, Samsung Museum of Art, in Yongsan District, central Seoul.

Choi and Yi were a Modern Girl and Modern Boy of the 1910-45 colonial period and are those rare Korean artists who are still objects of great interest even today.

Beside the screen is an installation by the contemporary artist Cho Duck-hyun. It shows a time-traversing portrait made from an image of a girl in the 1930s and that of the artist’s daughter dressed as a Modern Girl, Japan’s version of America’s flappers.

Not far from Kim’s work are paintings by the contemporary pop artist Lee Dong-gi that are based on caricatures of Modern Boys and Girls, emphasizing their vanity and materialism, in newspapers from the 1920s. In another corner of the room are pieces of calligraphy by anti-colonial activists.

These pieces are part of the exhibition “Korean Rhapsody: A Montage of History and Memory” at the Leeum in central Seoul. The exhibition shows aspects of Korean modern and contemporary history and its influence on art while offering multifaceted interpretations of history by the artists.

“This exhibition functions as a recomposition, which takes historical works from the century of Korean modern art history as the woof and contemporary artists’ reinterpretations of the history of the past and memories as the weft,” Lee Joon, deputy director of Leeum, wrote in a statement. “Rather than a conventional chronological display, the [exhibition] utilizes the cinematic methodology of montage, which juxtaposes and contrasts images, to produce new meanings through a diachronic combination of the past and the present.” 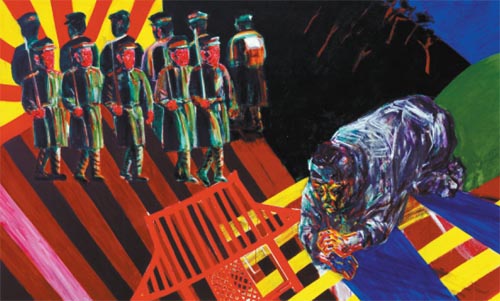 
Unusual juxtapositions can be seen throughout the exhibition, starting with Part I, “Symbols of Modernity (1876-1945).” A travelogue painting of Seoul from 1899 by the Dutch artist Hubert Vos is displayed alongside a traditional Korean painting of Gyeongbok Palace from 1915 by Ahn Joong-sik.

The most interesting part in this section is a small dark room filled with Japanese ukiyo-e woodblock prints from the Meiji period (1868-1912) that depict the political and social conditions of the late Joseon Dynasty (1392?1897) from the Japanese viewpoint.

One of the prints depicts a scenario in which Queen Myeongseong of Joseon, who is often called the Last Empress of Misfortune, is forced to kill herself by the Daewongun, the father of her husband King Gojong and an influential official. It boldly shows the distortion of fact and propaganda by the Japanese. In reality, the queen was assassinated by the Japanese in 1895 due to her pro-Russian leanings.

In another corner of Part I is a large painting by Park Saeng-gwang from 1983 depicting the assassination of the queen by the Japanese. “The painting, vigorously researched and compared to Picasso’s ‘Guernica’ (1937) by critics for the complexity of its symbolism and its vivid depiction of inhumanity, presents a visceral view of the murder scene through powerful colors unique to Park’s palette,” Lee explained in another statement. 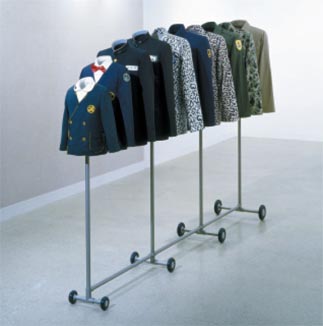 But Part I is not utterly gloomy.

“The social and cultural reality during Japanese rule was not all miserable,” Lee wrote, as it was also a period of dynamic modernization. So Part I includes works about Modern Boys and Girls and re-interpretations of them by the contemporary artists mentioned above.

Part 2, “Unfamiliar Hopes (1945-2011),” starts with works about the Korean War by artists who experienced it in person and post-war generation artists. The oil painting “Fighting Bulls” (1956) by the renowned modern artist Lee Joong-seop symbolizes the tragedy of the two Koreas that were once one.

Korea’s complicated political situation amid the trauma of the war and the following period of military dictatorship which was repressive but helped economic growth, gave birth to some of the country’s most avant-garde art movements, which transcended politics. This includes Abstract Expressionist paintings by Park Seo-bo and video art by Paik Nam-june. Their work coexisted with the so-called People’s Art, which directly criticized the government and society in a social realist style.

Moving into the 1990s, there are works by artists engaged in a contemporary discourse on identity: including “Do-ho Suh’s Uni-form/s:Self Portrait/s:My 39 Years” (2006).

“In his installations, Suh employs examples of Korea’s uniform culture - such as the black school uniform and the civil defense army uniform that resonate with everyone who grew up in the 1970s and 1980s - to show the relationship between individual identity and society,” Lee wrote.