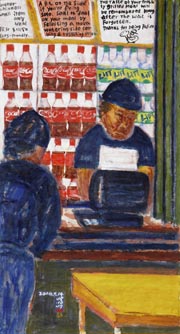 To April 10: In this exhibition, artist Suh Yong-sun explores the political undercurrents running through everyday life.

Based on his travels to New York, Berlin and Melbourne, the paintings and installations try to show that all subjects have a political context, whether it is readily apparent or not, and force the viewer to re-examine the things in their lives for deeper meaning.

In New York, Suh found desire and illusion - people dreaming of a world that was not what it appeared to be on the surface. In Berlin, he found an unfinished history of division. Finally, Suh turns his gaze inward to reflect upon himself as a painter. Through it all, it is unclear whether Suh is trying to deliver a specific political message with the works displayed here, but what ultimately emerges is a composite portrait of humanity that examines what it is to be human and the individual’s place in the urban landscape. 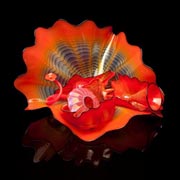 Chihuly was the first artist designated as a National Living Treasure by the United States and his works are housed in more than 200 museums worldwide.

The artist, who founded Pilchuck Glass School near Stanwood, Washington, lost sight of his left eye in a car accident in 1976, but that didn’t prevent him from continuing his work. But when three years later he dislocated his shoulder in an accident, he was unable to hold a glass-blowing pipe and faced the end of his career. Not to be discouraged, he hired artists to do the work for him and his career blossomed even further.

To April 24: This exhibition examines the relationship between the modern city and its inhabitants.

The 41 artworks on display span the globe and show scenes from cities in Korea - Seoul, Incheon, Sokcho, Busan and Chungmu - and abroad - Paris, Toledo, New York and San Francisco.

The paintings, media art, sculptures, installations, prints and photographs by 33 participating artists from Korea and abroad have all been selected from the Seoul MOA collection. 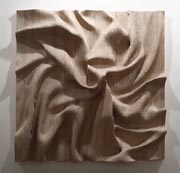 To May 1: In her first solo exhibition in three years, artist Cha Jong-rye breathes and interacts with wood through a striking series of sculptures and wall hangings.

The show features her “Expose Exposed” series, which, like her other works, conveys the art of perseverance through repetitive patterns in the texture and grain of wood.

Cha has been working with wood for the past 20 years and has shown her work in Hong Kong, the U.K. and various places in Korea.