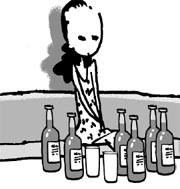 Under the authoritarian government in the 1970s, long hair and miniskirts were banned. Young people would play hide-and-seek with policemen out to penalize them for violating either infraction.

Strangely enough, those who broke the rules were charged with corrupting public morals. There is no provision on the corruption of public morals in the law, so they invoked the clauses of the law banning obscenity in performances and the Minor Offenses Act.

Entering into the 1980s, the practice of having women entertain men at hostess bars, known as “room salons,” had become rampant. Numerous women were employed as hostesses.

The corruption of public morals was cited again by law enforcement authorities and people began promoting the idea that the government should ban young women from making money by selling themselves. So the government inserted a clause on female entertainers “who can drink and dance with guests to entertain them” in the Food Sanitation Act, which limited female entertainers to working in hostess bars only.

Meanwhile, another industry has arisen. Although it is illegal for men to work as entertainers at bars and room salons, the number of host bars has grown quickly. That has given rise to a movement to criminalize the employment of men as entertainers, which was quashed by opposition from women who say that this latest movement was born of the “patriarchal idea that entertainers can only be women and that only men can enjoy the service of entertainers.”

Under the current law, male entertainers are nonexistent, because there is no clause on them in the law. Even if they are caught while engaged in illegal activities, there are no legal grounds to punish them. The Supreme Court also maintains that hostesses are “women who are paid by their employers or receive tips from their guests in return for entertaining their guests.” Therefore, the fact that there are over 100 host bars in the districts of Gangnam, Seocho and Songpa in Seoul and that around 10,000 female guests patronize these places every day sounds like a paradox.

We cannot go back to the time when people were punished for the corruption of public morals. To straighten out the distorted entertainment practices in our society, we should amend the related legal provisions and make room for both female hostesses and male hosts.