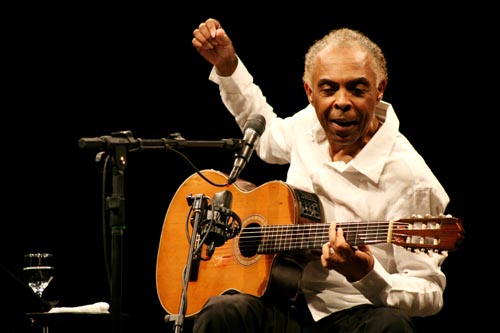 Gilberto Gil, the beloved Brazilian singer and former minister of culture, is having his first concert in Seoul on April 19 at LG Arts Center in southern Seoul. See MUSIC, left. Provided by LG Arts Center

Tomorrow: The Korea Festival Ensemble will perform pieces by Elgar, Schubert, Offenback and Brahms for this concert, which is held in memory of British cellist Jacqueline du Pre. Included in the program are Elgar’s “Saud d’amour,” Offenbach’s “Les larmes de Jacqueline” and Brahm’s Sonata for Cello & Piano No. 2 in F Major, Op. 97.

Benet has received three Grammy Award nominations in the R&B category and won the Naacp Image Award in 2000 for his duet “Spend My Life With You,” with Canadian R&B and soul singer-songwriter Tamia. The song spent three weeks on the top of Billboard’s Hip-Hop and R&B Songs chart.

Legend got his start recording with artists such as Alicia Keys on “You Don’t Know My Name.” His first album, “Get Lifted,” was released in 2004.

April 27: Romanian soprano opera singer Angela Gheorghiu - two-time winner of the Female Artist of the Year award at the Classical Brit Awards in 2001 and 2010 - will hold her first concert in Korea.

April 30: Lim Dong is a classical pianist who has won numerous awards from well-known competitions.

He won the Copin Competition for Young Pianists in Moscow at the age of 16 and in 2005 he tied for first at the 15th International Frederick Chopin Piano Competition in Warsaw, Poland. In the performance, he will be playing pieces such as Chopin’s “Nocturne Op. 55 No. 2,” “Barcarolle F-shape major op.60,” and Musorgsky’s “Pictures at an Exhibition.”

Saturday and Sunday: This performance highlights the talents of the National Dance Company of Korea’s Lee Jung-yun. The program features Lee’s new work “Eternal Dance” and a duet by Lee and Kim Ju-won of the Korea National Ballet. Lee is joined on stage by the Universal Ballet Company’s Hwang Hye-min and LDP Dance Company’s Shin Chang-ho, Nam Goong-yun and Lee Sang-eun.

April 14 to 15: The Seoul Metropolitan Dance Theater presents its version of Tchaikovsky’s “Swan Lake.” This production, set in ancient Korea in Manchuria, blends elements of traditional Korean dance - including a sword dance, a flower dance and a fan dance - with more traditional ballet and modern dance choreography.

To April 24: “Monte Cristo” is a musical retelling of Alexandre Dumas’ 1844 novel “The Count of Monte Cristo.” The story follows Edmond Dantes, an honest sailor who is wrongfully arrested during his engagement party for being a traitor to his country.

To carry out his plan for revenge, Dantes transforms himself into the mysterious and wealthy Count of Monte Cristo.

To April 17: This play, directed by Oh Tae-suk, blends mask-dance styles from different regions of Korea to tell the story of a young lion named Geum-hwa who transforms herself into a human being, falls in love and learns that being human is not as easy as she thought it would be.

April 23: An Sur-yeon is a haegeum (a traditional instrument resembling a fiddle) player who also sings. She is a member of the National Orchestra of Korea. For this concert, she will perform popular hits from her previous albums such as “My Heart is Azure,” “Czardas” and “Amazing Grace.”

Today to April 17: Seven national opera companies will perform during this festival - now in its 13th year - under the title “An Invitation to the World of Contemporary Opera.”

Giancarlo Menotti’s “The Telephone” and Seymour Barab’s “La Pizza Con Funghi” will be performed from today to April 10.