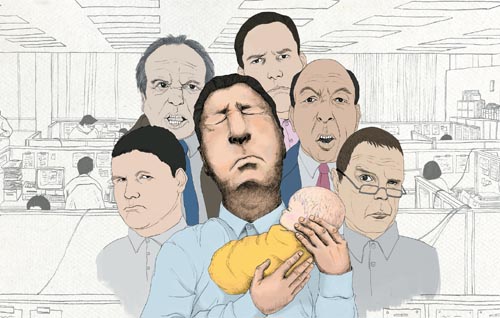 
Gang Joon, father of a 2-year-old daughter, was one of only 819 Korean men to take paternity leave last year. In fact, men accounted for only 2 percent of those who took advantage of the state-sponsored program.

During his 12-month leave of absence, the Ministry of Health and Welfare worker proudly accepted his new homemaker responsibilities, while his wife worked full time.

According to Korean law, all employees with a child under the age of 3 are eligible to take a year off to care for their children. Up to 1 million won ($919) in salary is provided monthly.

But a patriarchal family structure and an unbending corporate culture prevented all but 819 men from taking time off from their jobs last year to care for children.

Gang, though, said he was all too happy to break from the Korean father mold that typically involves long hours at the office and even more time drinking with colleagues.

“I wanted to become a real father who can be with my child. I take pride in that I fully took care of my daughter for a year,” he said.

There were challenges, such as coping with a feeling of alienation. Gang didn’t see his colleagues in the 12 months because of rumor-mongering about the true intent of his leave of absence.

Career consequences also weighed heavily on his mind. “I was concerned about what kind of work I would be in charge of when I returned,” he said.

Gang has been the only male employee to take paternity leave at the Health and Welfare Ministry in the last 17 months.

Experts link Korea’s declining birthrate to an increasing participation of women in the workforce.

As more women become absorbed in careers, they have fewer babies on average because their husbands are unable or unwilling to pick up the slack at home. 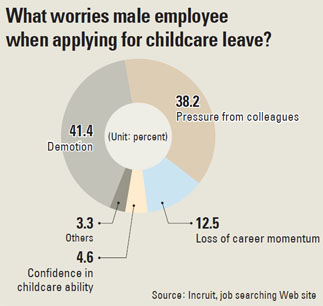 Korea has reported the lowest annual birthrate among Organization of Economic Cooperation and Development member countries since 2007. The birthrate - the average number of children born to a woman over her lifetime - was 1.15 in 2009 and 1.19 in 2008. The OECD average in 2009 was 1.64.

In an attempt to reverse the trend, more than 100 support plans, benefits and policies have been created by the government.

The one-year child care leave program for both mothers and fathers could be the most effective, but too few fathers take part, say experts.

“Women used to stay at home and look after children, but many of them are active in the labor market even after marriage and birth. If they are forced to juggle work and child care without help from their husbands at home, they will simply bear fewer children,” said Lee Sam-sik, researcher at the Korean Institute for Health and Social Affairs.

“After all, letting fathers share child care with their wives is the best solution to this problem. It won’t be easy to change corporate culture in a couple of years, though, because Korean society is deeply based on patriarchy,” added Lee.

The government has teamed up with civic groups to pressure corporations to lower their working hours and foster family-friendly companies over the years. Although the number of working hours has decreased somewhat, efforts have largely failed to increase the birthrate at all.

Ironically, not one father is taking paternity leave this year among the ministries tasked with finding solutions for the low birthrate - the Ministry of Health and Welfare, the Ministry of Gender Equality and Family and the Ministry of Employment and Labor.

Samsung Electronics, the largest Korean corporation by market value, had the largest number of male employees who went on child care leave last year - 12. The company employs a total of 157,000 people.

To find a solution, Han Yu-mi, a professor of early childhood education at Hoseo University, points to Sweden and Norway.

When the two countries introduced a similar plan to Korea’s 12-month child care program in the in the 1970s, they, too, failed to attract many men, who were afraid of sacrificing their careers for short-term relief at home. “In order to encourage fathers to use parental leave, the governments introduced a ‘father’s quota,’” said Han. 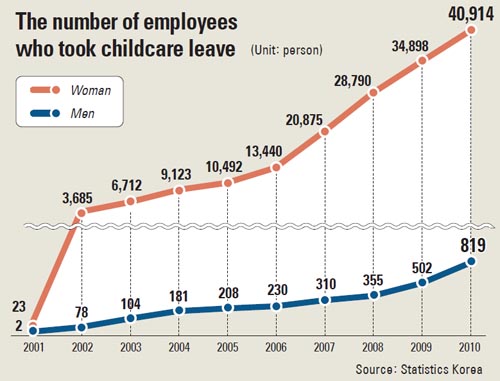 Of the 16 months given to Swedish parents to care for their children, fathers must use up at least two months of that. To reduce the economic burden on families, the government has chipped in to help companies pay 80 percent of the worker’s wages for the first 13 months.

Such financial incentives are far less generous in Korea.

Current law stipulates that only 40 percent of wages be paid to those on child care leave, with a maximum of 1 million won per month. As of this year, the minimum cost of living for a four-member family is 1.43 million won, indicating that even if the maximum 1 million won is granted, it is far from enough to support a family.

Ahn Jae-young, father of a 3-year-old son, recently took a day off to take his child to an amusement park on his birthday. He said more fathers would take time off to care for their children if the economic burden were not so high. “The most important duty of Korean fathers is bringing home the bacon and providing their children with a better environment to grow up in,” he said.

Kim, who didn’t want to reveal her full name to protect her husband’s reputation, is a working mother with two children. She says money is a factor. When her husband took a year off to care for their children, his pay was only slightly more than what it would have cost to hire a babysitter.

“I could’ve hired a babysitter instead of allowing my husband to take his leave, but my husband is a public official and his monthly pay, as everyone knows, is not that high. There was just a slight difference between getting a babysitter and him going on paternity leave,” said Kim.

For them, having a parent at home full time enriched their family life. Kim said the family came to understand one another better. “Promotions are, of course, important, but we thought our family life was more important than work life.

“The best part of my husband staying home is that he now fully understands why I was having a hard time with the children. When I was on maternity leave, I used to call him around 6 p.m. and ask what time he’d be coming home. Now, he does the same thing,” said Kim.

Shin Kyung-ah, a professor of sociology at Hallym University, said it is up to the government to enact meaningful measures to promote change, just as in Northern Europe.

“The onus is on the government to take the reins on this issue. The government laments the falling birthrate, saying it will ultimately lead to a decline in the economically active population, but the most urgent issue we will face in the future is a declining consumer base, which leads to lower economic growth and lower tax revenue.

“With no younger generation, what is the use of building high-rise apartments and producing goods?”