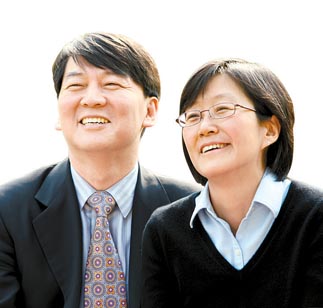 Seoul National University established a convergence department for science and technology in 2009.

The nation’s top college, however, failed to meet its quota of 233 students as only 132 students enrolled.

The deanship position had been vacant since Kim Hong-jong left in February.

Faculty members thought Ahn was the most suitable person, and Kim Hong-jong, chief of school affairs, persuaded Ahn to accept the position.

Ahn earned his bachelor’s, master’s and doctorate from Seoul National University College of Medicine from 1980 to 1991.

Ahn obtained a master’s in science engineering at the University of Pennsylvania in 1997 and an MBA from Wharton in 2008.

Ahn’s aides said he hesitated about making up his mind until he was invited to speak at SNU’s matriculation ceremony on March 2.

They said Ahn was deeply moved by SNU students’ warm reception for him at the ceremony.

Ahn expressed hope that his wife, a Kaist professor, will be able to teach at SNU, to which SNU obliged.

Ahn’s wife, Kim Mi-kyung, had been a professor of medical science at Kaist.

“Professor Kim will teach medical policies and a class on medical patents and she will give lectures in Ahn’s department, too,” said Kim Hong-jong, chief of school affairs at SNU.