Hook ’em with the first line

Hook ’em with the first line 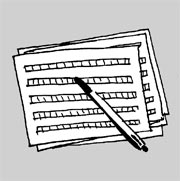 Joseph Sugarman, a famous American author and marketing expert, asks himself in his 1998 book “Advertising Secrets of the Written Word” whether there is a role for the first sentence of a book or article other than making the reader go through the rest of the piece. Then he replies that it is making the reader read the second sentence.

The first sentence creates the first impression. Ernest Hemingway said that when it was hard to write, things would go all right if he only wrote a sentence that reflected his sincerity. But how easy is it to find a line that does that? That is why so many writers talk about the pain of writing that first sentence.

Prominent literary works often begin with a gripping first sentence. “The Metamorphosis” by Frank Kafka is like that. It begins: “As Gregor Samsa awoke one morning from uneasy dreams he found himself transformed in his bed into a gigantic insect.” It is said that Nobel laureate Gabriel Garcia Marquez was so surprised at the sentence that he rolled off his sofa.

A remarkable first line by a literary master also gives inspiration to other authors. In “Ada,” Russian writer Vladimir Nabokov writes that happy families share something unique, but unfortunate ones share similar problems. It is presumed that this line is slightly modified from the first line of Leo Tolstoy’s “Anna Karenina” which begins by saying that happy families look similar to each other, but unfortunate ones suffer from respective bad luck.

The American Book Review selected 100 novels that begin with memorable first lines. Herman Melville’s “Moby Dick” came in first place. It begins: “Call me Ishmael.” Compared to the length and magnificence of the story, it is a simple beginning. The author must have chosen it in consideration of the work as a whole.

Since Shin Kyung-sook’s “Please Look After Mom” was published in the United States in English, the book has been ranked one of the 50 best-selling books on Amazon.com.

It begins: “One week has passed since Mom was lost.”

In an interview, Shin said she could not write a story about her mom, although she agonized about it for a long time. But she said the first sentence came to her one day out of the blue. It is a powerful line that refers to the mother’s sacrifice and dedication. Of course, it also makes them read the second line and go on to read the rest of the book.