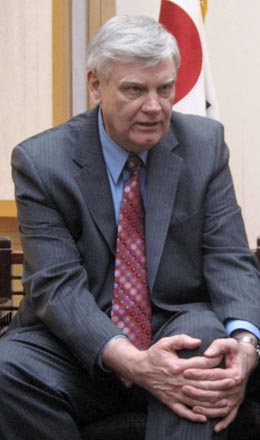 Last Wednesday, the Ministry of Foreign Affairs and Trade announced with pride that Korea had outpaced advanced countries in increasing official aid for developing countries last year. The next day, it withdrew the announcement citing insufficient data for other countries.

It eventually turned out that Korea was second on the list for largest increases in Official Development Assistance among the Organization for Economic and Cooperation Development countries with a 27.7 percent rise, compared to Portugal’s 31.5 percent increase.

The mistake, apparently made in a hasty bid to impress the world, is an indicator of Korea’s obsession to live up to its relatively new status as a donor nation. In late 2009, Korea joined the OECD’s Development Assistance Committee, which handles the use of ODA from member countries.

According to Brian Atwood, chairman of the DAC, Korea’s zeal is greatly appreciated. He said Korea is making an impact on the rest of the donor nations with its commitment to providing a helping hand to less fortunate nations.

“Korea has already exceeded expectations in terms of what it contributed to development thinking at the G-20 meeting, the Seoul Consensus,” Atwood said. The Seoul Consensus is a set of guidelines endorsed at the G-20 Summit in Seoul in November for coordinating efforts to help less developed countries.

Korea is also “hosting the Fourth High Level Forum on Aid Effectiveness [HLF-4] in Busan, so I don’t think any DAC member in recent years has done as much on development,” Atwood said, referring to the international OECD gathering slated for later this year in Busan.

Korea, promoting itself as the only country transformed from an aid recipient to a donor country, spent $1.2 billion in ODA last year, placing it 18th out of the 23 DAC members by ODA volume.

Still, that amount accounts for only 0.12 percent of Korea’s gross national income, the smallest portion among DAC members. It pledges to increase it to 0.25 percent by 2015.

Atwood said Korea’s current pace makes it likely that it will meet that commitment.

“There are countries that went for years without passing a law, saying, ‘We endorse the idea of official development assistance,’” he said.

Atwood, who took office as DAC chairman in January, came to Korea to gauge the country’s readiness for the HLF-4, an event he described as the most important international meeting on development in the next five years. Around 2,500 people from around 100 countries are expected to attend from Nov. 29 to Dec. 1 at Busan’s Bexco.

“Busan is extremely important, possibly the last chance to revitalize the world’s efforts to reach the [United Nations] Millennium Development Goals,” he said.