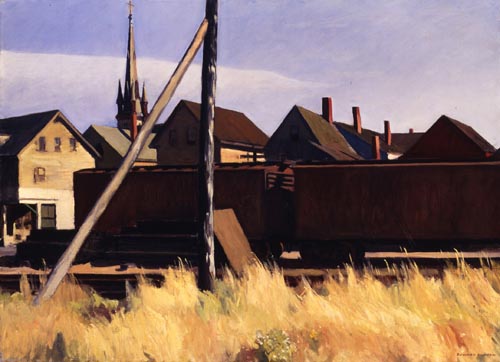 
NEW YORK - A new exhibit promises to shed light on the life and work of one of the 20th century’s most iconic artists: Edward Hopper.

“Window into Edward Hopper” at the Fenimore Art Museum in Cooperstown, New York, which opens on May 28, will show some of the American artist’s early sketches, etchings and water colors in a rare glimpse into his early development.

“Our curatorial focus is to look at the maturing of his artistic vision to try to understand how he became what he was,” said Paul S. D’Ambrosio, chief curator at the Fenimore.

The exhibit contrasts Hopper’s early life drawings with the startling turn he takes as he begins to find his own definitive style.

“Hopper’s greatest, most original print, ‘Night Shadows’ [1921] uses a plunging perspective that is both exhilarating and disorienting and that sets up an anxious relationship with the street below,” wrote Carol Troyen, author of “Edward Hopper,” in an article written for the Fenimore’s exhibition.

There have been many big Hopper exhibitions but none have had the Fenimore’s focus on earlier works, according to D’Ambrosio.

Those include schoolboy drawings of figures in exotic costumes, turn of the century studies from when Hopper was a student at the New York School of Art, and a striking portrait of William Merritt Chase, the 19th century exponent of American Impressionism and one of Hopper’s early teachers.

There are also works for those seeking Hopper’s breathtaking later oil paintings.

His sweeping landscape “The Camel’s Hump,” which he painted in 1931, and “Freight Cars, Gloucester,” done a few years earlier, are expected to be the two “show stoppers,” said D’Ambrosio.

The exhibition is complemented by a performance of “Later the Same Evening”, a one-act opera inspired by five Hopper paintings at the Glimmerglass Festival, also in Cooperstown.