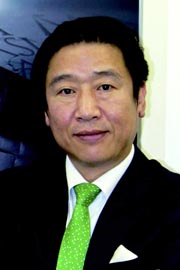 Since being established in 1988, Romanson has grown into Korea’s biggest wrist watch brand.

It has overcome a number of challenges, including the 1997-98 financial crisis and the most recent global economic crisis that struck two years ago.

Romanson products reach consumers in about 70 countries, with exports totalling about $25 million per year.

Kim Ki-seok, the CEO of the company, has been there almost since the beginning. He joined Romanson in 1989 and became CEO in 2009.

Kim credits Romanson’s success to a focus on design, branding and production, while other companies focused on OEM (original equipment manufacturing) methods.

“Romanson is more popular in overseas markets than it is in Korea, as we incorporate designs in a cooperative effort with companies from Switzerland.

“We continue to create our own technology; our plating and cutting technologies are excellent,” said Kim.

“It may be hard to compare us to the top Swiss luxury brands, but we have strong competitive power in the global mid-priced market - in which watches sell for between 500,000 won and 3 million won ($461 to $2,766) - in terms of design and technology,” the chief executive added.

He said their luxury designs have proven extremely popular in Russia and in the Middle East.

Another key component of the company is its R&D department, to which 10 percent of Romanson’s operating profits have been directed annually for the past 20 years.

Romanson has been participating in Basel World in Switzerland - the world’s largest watch and jewelry exhibition - for the past 15 years.

He said that in order for Korean brands to succeed, it was important for watches to be seen as more than a device but something that can boost one’s social status.