Moving past distraction to inner peace

Moving past distraction to inner peace 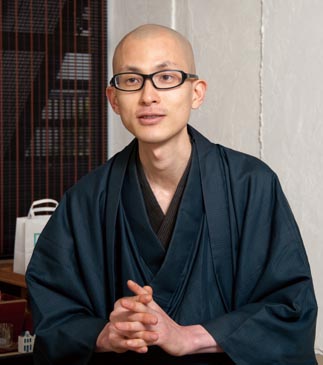 Our lives are filled with distractions, yet it is difficult to rid ourselves of distracting thoughts when they enter our minds. We think about yesterday’s failures or our worries about the future and then exaggerate these ideas, which bring us unhappiness. That, in turn, increases our regret and worry and the cycle begins again.

But for thousands of Koreans, a young Japanese monk is providing some sage wisdom about how to free themselves from the cycle. His name is Koike Ryunosuke, 33, and his book, “Practice Not Being Angry,” sold 70,000 copies in Korea just 10 days after it was released in March.

“Rid yourself of distracting thoughts by concentrating on the five senses and stay in the present moment,” Ryunosuke said. “You will feel satisfied with your life and happiness will return.”

In his book, he teaches people to discard unnecessary thoughts through focused meditation and lays out a series of practical steps one can take to achieve peace in their daily lives. 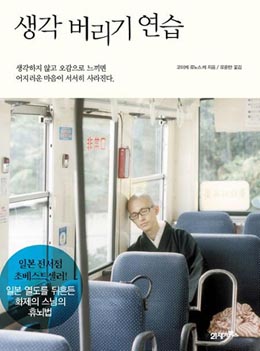 The cover of the Korean translation version of “Practice Emptying Your Mind,” which has been a bestseller in Korea in recent months.

His Five Senses Meditation method is rooted in pre-sectarian Buddhism, which is sometimes called “original,” or in Japan “early,” Buddhism and is oriented around the teachings of Siddhartha Gautama, its founder. Ryunosuke teaches that by focusing on the five senses, it is possible to overcome the distractions of daily life, which he says have only increased in the information age.

His previous book “Practice Emptying Your Mind,” appeared on bestseller lists after it was published in September and has sold over 370,000 copies.

The sales figures are unprecedented in Korea, where it is unusual for two books by a foreign author to be on the bestseller list at the same time.

In addition to record sales in Korea, both books have had an impact in Japan, where sales of both books have reached 120,000 and 300,000 copies, respectively. Through his Web site, he reached out to the victims of the recent earthquake and tsunami there and provided advice on how to overcome the anguish they felt.

The JoongAng Sunday interviewed Ryunosuke via e-mail to learn more about the book and his teachings.


Q. In your book, you teach people to meditate by focusing on the five senses in order to empty the mind. Could you describe this method in greater detail?

A. My method of meditation is not exactly new. I’ve just adapted existing methods and focus on the five senses.

When you inhale, you can feel the air come in through the nose and flow into the body through the throat. If you concentrate on the movement of the breath as it circulates through the body, you can separate yourself from distracting thoughts. My Five Senses Meditation method is rooted in pre-sectarian Buddhism, which recognizes only that which can be verified.

Could you talk more about pre-sectarian Buddhism as a religion and how it figures into your meditation practice?

I do not consider Buddhism a religion, and I do not believe in anything. I pick out the elements of Buddhism that can be used as tools to survive in this chaotic society and deliver them in a way that can be understood by contemporary people. This kind of approach makes people less dependent on religion.

If there were a basis for what I do, it would revolve around the question “Does it increase or decrease agony?” For example, if you feel anger, you should get to the root of it. Only by doing that can you rid yourself of it. Stay positive and avoid unnecessary distractions.

So do you think relying on an omnipotent God is anachronistic? What do you think about the idea that people tend to turn to religion after natural disasters such as the earthquake and tsunami in Japan?

If we considered natural disasters a punishment by God or Buddha, he would be a very egoistic and violent being.

Siddhartha Gautama did not talk about God or Buddha. Regarding things that cannot be verified, like God, he said that it is best to turn inward and cultivate oneself, rather than focus on an external being. He said: “Rely on yourself, stand on your own two feet.”

On your Web site, you say that victims of the earthquake and tsunami can avoid “secondary damage” by controlling their reactions to the events. What did you mean?

In Buddhism, we react to things in this way. First, you record an event in your mind using the five senses. Then you interpret the event with your own knowledge and experiences. Based on your interpretation, you either feel pleasure or displeasure and finally your emotions kick in.

For example, you see images of the earthquake and tsunami with your eyes. Then within a split second you analyze it and conclude that the event is greater than any disaster you’ve ever seen and begin to feel pain. Finally, you become sad or anxious. If you are able to separate your reactions to real events from the actual events themselves you will begin to realize that you are the source of your own sadness and anxiety, and you can let these emotions go.

You say in your book that art, entertainment and economic prosperity have nothing to do with happiness. What did you mean?

With the belief that economic development is essential to happiness, people compete with one another, which has created a lot of unhappiness.

Everyone rushes around without thinking and their minds eventually become barren, unstable and, eventually, unhappy. This system in which people mass produce and mass consume what they want in pursuit of pleasure has reached its limit.

I wish we could produce and consume only what we need to live, instead of products that stimulate desire. These include only those things essential to living, such as food, clothing and shelter.

Our obsession with originality produces a lot of stress in contemporary society. But in fact, nothing is original. Yet the media and schools teach that one cannot succeed in life without originality. This makes people try desperately to differentiate themselves from others, by buying products or doing things that no one else has, producing stress. But in reality we are not very different from each other. And in striving to be original, the concept of originality has lost its meaning.

In the realm of employment, the desire for recognition, which is why many people work, is also one of the agonies. Once people begin to pursue their passions, they start to obsess about them, which makes them less happy. Instead, people should do what they can and have to do and learn to draw happiness and fulfillment from reality.

That sounds very strange. Are you saying that we shouldn’t have any ambitions or dreams?

Not necessarily. The impetus for doing something fun or interesting comes from dopamine, a chemical found in the brain that delivers feelings of pleasure. The brain can produce dopamine based on the satisfaction that comes from having achieved something. But the pleasure does not last long. You immediately begin to feel anxious and lose serenity. So you set a new goal. When you achieve it, you search for another, repeating the cycle again and again to feel pleasure. This cycle of anxiety and relief for momentary pleasure comes from the West. But it destroys composure, objectivity and morality and ultimately leads to dissatisfaction instead of fulfillment.

In contemporary society, we have replaced real happiness with dopamine. People think they are working to be happy but in fact they are all unhappy from the effect of dopamine leaving the system.

On the contrary, if you do work that is unrelated to ambition or pride, you mind will become calm. This peaceful state comes from serotonin. When the brain produces serotonin, the mind becomes clear and the heart is stabilized. Walking, eating slowly or focusing on inhaling and exhaling the breath helps release serotonin. Simple and repetitive work like this is ideal.

In your book you say that our desire for recognition is another major source of stress. You also say that social networking services such as Twitter enlarge the ego and thereby feed that desire. Do you think these services are useless?

These services simply exploit loneliness and disturb a person’s inner balance. People try to gain recognition by posting messages on social networking services, but in most cases it is only established celebrities who are able to attract widespread attention. When people realize this, it creates anguish, frustration and a negative self-image. But because our society values recognition, people continue to seek it, and that is how the services continue to feed our desire for it.

Whenever you receive pleasure from the feeling that someone responded to a message, you are stimulated by dopamine, and dopamine is addictive. If you are exposed to an excessive amount of dopamine from frequent recognition by others, you will soon become addicted to dopamine and lose your feeling of inner peace.

For your own well-being, it would be best to quit using these services altogether. But if that is not possible, try to limit the amount of time you spend with them. Don’t get on the Internet in the mornings and at night and exercise instead or set fixed intervals between log-ins. This will lessen the addiction by giving you sufficient time to recover from the effects of dopamine and ultimately set you free.