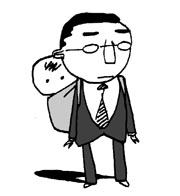 In the animal kingdom, there are many examples of males devoted to raising their young. Male golden lion tamarin monkeys in South America rear their young from birth and the baby monkeys are handed over to the mothers for feeding. Penguins are also known for paternal love. When the female penguin leaves to find food after laying her eggs, the male stays in the nest to incubate them. The father often eats less and may lose up to 40 percent of its weight.

In the human world, the responsibility for childcare usually falls to the mother. Are women better at taking care of children then men by nature? Researchers do not think so. University of California Professor Ross Parke is an expert in the study of fathers, and he has spent time observing interactions between infants and their dads. The fathers talk to the babies, kiss and play with them just as much as the mothers do. They also respond to a baby’s need for food, entertainment and comfort. The moment a baby is born, the father feels a close connection with his child, just as the mother does. He argues that there is no reason to categorize fathers as fundamentally inferior when it comes to childcare.

A psychology research team at the University of Regensburg in Germany did a study in which they observed children playing with their fathers at various stages for four to six years from birth. These children maintained close relationships with their fathers even when they grew up. The study illustrated the importance of the participation of fathers in childcare.

Sharing childcare duties has become a global trend. In the U.S., an increasing number of fathers choose to stay home and take care of children and do household duties. Japan is urging its fathers to participate in childcare with the slogan: “A men who does not participate in childcare does not deserve to be called a father.”In Korea, 819 men applied for paternity leave last year, up 63 percent from the year before. In the first quarter of this year, 273 men took paternity leave, nearly twice the number in the same period last year. But fathers still make up only 1.9 percent of the total childcare leave applicants. Men are worried about possible harm to their careers. Now, a policy of mandatory childcare leave may be implemented to boost paternal participation. Yet many Koreans still look askance at fathers who participate in childcare. Unless the social atmosphere changes, we will be discouraging fathers from using their paternity leave.