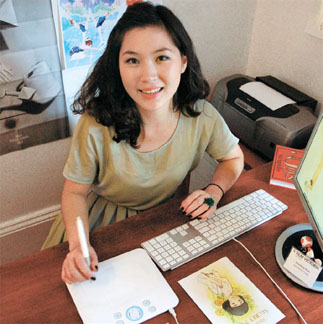 Courtney Kim, 27, works in her office in Melbourne as she prepares for a world tour of her exhibition “Story of a Secret State,” which she organized to raise awareness to the realities of life in North Korea. One of her illustrations, which is part of the exhibition, appears in the foreground. By Lee Han-gil

MELBOURNE - Artists often use their work to call attention to various causes, whether personal or political.

A young Korean-Australian illustrator joined this group of artist-activists when she launched the group art exhibition “Story of a Secret State” at the Human Rights Arts and Film Festival in Australia last year. The artworks in the exhibition depict the harsh, and hidden, reality of life in North Korea.

The artist and exhibition organizer, Courtney Kim, 27, is now preparing to take the exhibition on the road, beginning with stops in New Zealand and China, and she was busy preparing for the tour when we talked in Melbourne on April 5.

“It’s a shame to see South Korea’s achievements, such as hosting the G-20 Summit and 2002 World Cup, receiving less acknowledgement because of the bad news about North Korea’s foul deeds,” she said.

Kim identifies herself as a member of the P Generation from Australia and says she is eager to make the world a better place to live through her art. The Korean term describes a generation characterized by its patriotism and participation.

But she hasn’t always walked an easy path. Despite attending the prestigious Sun Hwa Arts School, Kim said she was labeled as a troublemaker at school until she came to Australia in 2001.

Kim said that in Korea, she had always felt out of place and found it difficult to deal with an education system that focuses only on college entrance exams. To cope, she said she developed some bad habits in middle school, including drinking and smoking.

But her move to Australia changed her life. Kim enjoyed studying in a freer atmosphere and gained admission to Monash University, which is renowned for its arts department, in 2003.

After working for two years at a design company, Kim established her own design company in 2009. Although she majored in Web design, she also works in fashion and interior design as well.

She started planning the exhibition in 2009 after participating in an international conference in Melbourne about North Korean human rights and refugees.

Kim said she wept upon hearing stories about life in North Korea. One person talked about young children who risked their lives to cross the river in an attempt to escape the North. Another told of a family who was publicly executed when caught trying to flee. According to Kim, the family’s corpses were sold as meat in a local market.

Kim said she promised herself that she would tell the world the truth about North Korea and do everything she could to raise awareness about the rights abuses there.

To convey her message to Australians, many of whom are not aware that Korea is divided in two, Kim decided to use illustration rather than abstract painting.

It wasn’t easy for Kim to organize such a major group exhibition. She was a young unknown artist, and no one was interested in what she was trying to do. But she was finally able to persuade nine artists from South Korea, Australia, China and the United States to participate. She also raised some funds to cover the exhibition costs but said she still ended up paying about 4 million won ($3,700) out of her own pocket to cover the 10 million won exhibition cost. But for her, the expense was worth it.

“I can earn money anytime, but scores of people are dying in North Korea,” Kim said.

The exhibition opened on April 26, 2010, It drew more than 2,000 visitors in all, as well as the attention of the Australian media.

Kim said she felt tears well up in her eyes and a lump in her throat as she was giving a speech at the opening.

“It was such a valuable experience for me. It allowed me to realize I can make the impossible, possible,” Kim said. “I’ve also realized the importance of my country through hearing stories about North Korean defectors.”

But Kim’s interest in human rights doesn’t stop at North Korea. She is planning to organize another exhibition about child soldiers in Africa.

“I believe artists or designers should not just be considered as people who make pretty products, but as people who change the world by communicating with people through art,” Kim said.

For more information on the exhibition, visit the Web site, www.storyofvoices.com.