Canberra, Seoul push ahead on FTA

Canberra, Seoul push ahead on FTA 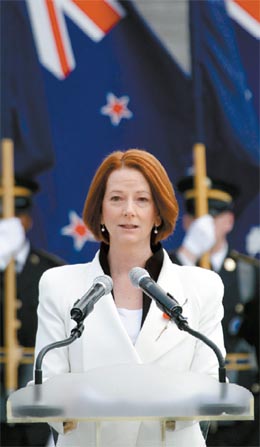 “I am very pleased that out of our discussion, we were able to agree that the negotiation on the free trade agreement should be concluded this year,” Gillard said at a media briefing in a Seoul hotel after meeting with President Lee earlier in the day. “I will be instructing Australian trade negotiators to work to this timetable,” she said.

The Blue House also said in a joint statement that the two leaders agreed that negotiations were in their final stage. The two countries have held five rounds of negotiations over the pact since March 2009, but substantial differences are known to remain on such areas as beef, dairy products and autos.

The Australian side has long expressed the desire for the agreement to be signed within the year. Analysts said Australia is partly motivated by concern over the impact of Korea’s two pending FTAs with the United States and the European Union on those countries’ agricultural exports to Korea. Korea wants Australia to lower barriers on imports of industrial goods.

At the briefing, Gillard said she is confident the two countries will conclude the FTA talks this year, saying they have already gotten to a point where both she and Lee were needed to express political will to get it done.

The two leaders also discussed other measures to deepen their partnership in trade and development of natural resources, the two sides said.

Gillard said that Australia particularly hopes more LNG projects involving Australia and Korean companies could come to fruition in the near future.

Korea’s state-run Kogas signed a deal to buy a stake in Australia’s Gladstone LNG in December last year. Korea is the world’s second-largest importer of LNG, while Australia is a major exporter of natural resources, including LNG, to Korea.

“I noted to the president that there is the prospect of significant increases in LNG exports to Korea,” she said.

To deepen cooperation on the North issues, the two leaders agreed to work toward establishing a regular “2+2” meeting, involving both foreign affairs and defense ministers from the two sides. Korea initiated that kind of format for security discussions with the United States last year.

Gillard came to Korea from Japan on Saturday as part of a 10-day overseas trip that also includes stops in China and the United Kingdom. She left for China last night. Her three-day itinerary in Korea included a visit to the War Memorial of Korea in Seoul yesterday to pay tribute to the soldiers from 16 allied countries killed during the Korean War, including 340 Australians. Around 17,000 Australian soldiers fought for the South during the 1950-53 war.

The prime minister also visited the demilitarized zone on Sunday where she said she felt “the sense of insecurity that South Koreans live with.” She said it was a unique, personal experience to get a glimpse of “what it is like to have a country alongside you that is periodically engaged in acts of aggression and provocation.”

Last year, Australia joined a multinational investigation into the March 26 sinking of a South Korean warship. The investigation led by the South concluded that the incident, which killed 46 South Korean soldiers aboard the Cheonan, was a North Korean attack, which Pyongyang denies. Gillard reiterated Australia’s condemnation of the North’s attacks last year, which also included the shelling of the South’s Yeonpyeong Island, killing four South Koreans.

She said her country also condemned North Korea for its human rights abuse. “You couldn’t get a starker contrast between two nations - democratic, prosperous South and the repressive North, in which people struggle for the basics of human lives,” she said.