Is it public will if there’s low turnout?

Is it public will if there’s low turnout? 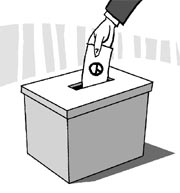 Not only poet Kim Ji-ha but also Emperor Yao of China knew that satisfying the public appetite is the key to politics. If the people are well fed, it’s good governance. But even the legendary Chinese ruler agonized over the difference between the lunar year and the calendar year.

Finally, the problem was solved by inserting a leap month in the lunar calendar, which had 354 days, so that the calendar followed the calculation that a year had 366 days. It is believed to be one of the greatest achievements of Emperor Yao. Later, an error was found in that calendar, and Emperor Wu of Han adjusted the lunar calendar by adding seven leap months in 19 years.

The solar calendar is not free from error, either. The Julian calendar, which adds a leap year every four years, and the Gregorian calendar, which made the adjustment of canceling three leap years over 400 years by making them into regular years of 365 days, are not perfect. The length of a year is 365.2422 days in the solar year, while it is 365.2564 days in the sidereal year. Therefore, it is necessary to make adjustments in the calendar.