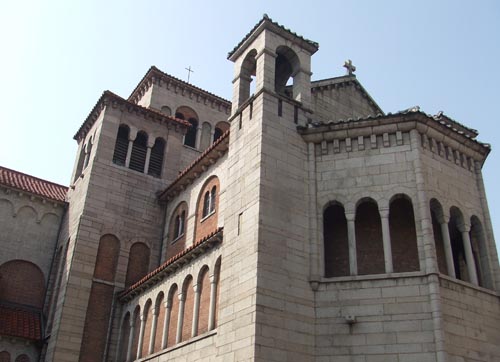 
Seoul is a city where history intermingles with modernism and Eastern traditions mix with imported Western styles.

The best way to get a sense of this fusion is on foot, walking the streets of downtown Seoul. For the history buff, the area offers a chance to learn more about the city’s 600-year history through important religious and diplomatic institutions.

Several well-known structures in this area were designed by foreigners who came to live in Seoul in the late 19th and early 20th centuries and combine Western and Korean design elements in unique ways. Each of these buildings tell a story about the influence of expatriates in Seoul during a critical turning point in Korean history.

Situated across from City Hall and beside Deoksu Palace, the Seoul Anglican Cathedral was the first Anglican cathedral in Korea. It was also the first building constructed in Romanesque style in the city and has been designated as Tangible Cultural Property No. 35 by the Seoul government.

This beautiful construction incorporates five elements of traditional Korean design. On the roof, tiles commonly found on hanok, or traditional Korean houses, were used. Like in many Korean buildings, granite was used for the foundation of the building. In addition, Korea’s traditional muntin bars are found in the windows of the cathedral. Lastly, the bell tower of the cathedral was designed to mimic the octagonal columns of the nearby Deoksu Palace.

Tours of the cathedral are available Monday through Saturday from 11 a.m. to 4 p.m. To reserve a guided tour, visit www.cathedral.or.kr and write the date and time you wish to visit the cathedral on the community message board or call (02) 730-6611. The cathedral can be reached by going to City Hall Station, line No. 1 or 2, exit 3. 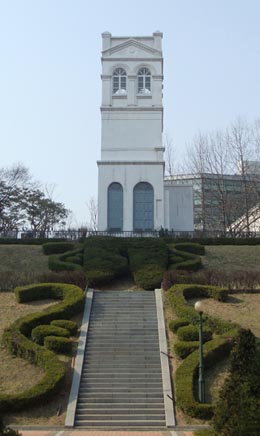 Designated as Historical Site No. 253, the old Russian Legation is located in Jeong-dong behind Deoksu Palace, and it more precisely refers to the legation tower.

It was designed by a Russian-born Swiss expatriate named Afanasij Ivanovich Seredin Sabatin in 1890. The architect came to Korea at the age of 23, having received an offer from King Gojong to build palaces and custom buildings.

Sabatin designed several monumental buildings in the capital, including Jungmyeong Hall in Deoksu Palace, Sontag Hotel and the Independence Gate. The architect infused Korean and European design characteristics into his creations and the Russian legation was built in the Renaissance style.

The three-story tower building was a part of the Russian legation complex and was later used as the consulate of the USSR after World War II. King Gojong intended to make use of Western powers to control Japan and thought of Russia as crucial to this effort. Backed by the King’s favor, the Russia legation was built on higher ground than other countries’ legations, so that the top of the tower could overlook the four major gates in the capital along with Gyeongbok Palace and Deoksu Palace.

The Legation is a reminder of Korea’s often tragic history, having served as King Gojong’s refuge after the murder of Empress Myeongseong by the Japanese in Gyeongbok Palace. The king stayed at the legation for a year with the crown prince. Sabatin himself actually witnessed the empress’ assassination.

Unfortunately, most of the building was destroyed during the Korean War, with only the tower and the basement remaining. The tower was originally made with gray bricks and granite but was plastered white when restored in 1973.

Before it burned down, the Russian legation complex was L-shaped with a three-story tower and the front and sides were adorned with arched arcades and pediments.

A joint excavation conducted in 1981 by Seoul City and the Cultural Heritage Administration of Korea unveiled a secret chamber and an underground passage. The 20-meter-long passage is narrow, a mere 45-centimeters wide, and it links the chamber and the main office of the legation together. It is also said that the cellar of the tower was connected to Deoksu Palace by another tunnel.

To get to the Russian legation tower, go to City Hall Station, line No. 1 or 2, exit 1. Walk straight and turn left at Deoksu Palace and then walk straight until you encounter a roundabout. Take the second road on the right and keep walking until you see a hilly alley between the Canadian Embassy and Yewon School on your right-hand side. The tower is up on the hill.

In front of Seoul National University in Daehangno in eastern Seoul, is the old Daehan Uiwon, or the Great Han Hospital.

Built in 1907, it was a Western-style medical institution that provided comprehensive medical services during the late Joseon Dynasty.

During the Japanese colonial period, Daehan Uiwon was reduced to a subordinate hospital by the Japanese Government-General of Korea.

In 1926, its affiliate medical school was merged with Gyeongseong University and later became the Seoul National University Hospital following Korean independence in 1945.

A Japanese engineer, Yabashi Genji, at the Board of Architecture in the Ministry of Finance, designed the building.

Similar to the aforementioned buildings, the hospital was built using granite and red bricks, while the roof is covered with copper. The facade is symmetrical both front and back, and constructed in the Neo-Baroque style.

You can visit the old Daehan Uiwon by getting off at Hyehwa Station, line No. 4, exit 3, and it’s behind Seoul National University Hospital.

Cheondogyo is a religion founded in Korea and means the religion of the heavenly way.

The temple was not only a place of worship but also home to the independence movement fighting against the Japanese.

Cheondogyo was a driving force of grassroots activism and numerous protests were held at the temple, including the March 1st Independence Movement, the children’s rights movement and the celebration of Kim Gu’s arrival back to Korea.

Construction of the temple was proposed by Son Byung-hui, the third head priest of Cheondogyo and one of Korea’s most-admired patriotic leaders.

Erected in 1921, it was built by a Japanese architect, Nakamura Yoshihei, who designed a number of commercial banks in Korea as well as Sookmyung Girls’ High School.

The two-story temple with a four-story tower was built in the Vienna Secession style, a style of Art Nouveau, while the roof was done in Baroque style.

The inside and outside walls of the temple are engraved with birch flowers and roses of Sharon, the national flower of Korea.

Having played an important role in much of the modern history of Korea, the building was designated as Tangible Cultural Property No. 36 by the Seoul government.

It was once regarded as one of the top three buildings in Korea, along with Myeongdong Cathedral and the Japanese Government-General Building erected during the Japanese colonial period.

You can get to the Central Temple of Cheondogyo from Anguk Station, line No. 3, exit 5. The temple can be reached by walking about 50 meters toward Nakwon Arcade.