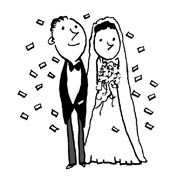 The king announced his pleasure that the royal family now had a young couple to rely on. But King Yeongjo did not celebrate the wedding in an exuberant fashion. He believed that the royal family should not waste the state coffers on luxurious ceremonies and should rather set a good example to the people of frugality.

Four months before the state wedding, the king issued an order that prohibited luxurious royal weddings. While sedan chairs and carriages for the wedding were typically made of gold, the king demanded that they be made of tin instead. He also ordered that gold ornaments for the wedding be replaced with gold-plated ones.

King Yeongjo’s approach to his grandson’s wedding stands in marked difference to Queen Elizabeth’s this past week. The British royal family attracted the attention of the whole world by holding a luxurious wedding that cost some 10 million pounds ($16.7 million). Over 8,000 reporters covered what is being called the wedding of the century and it is estimated that over 2 billion people around the world watched the event on TV.

The wedding is being criticized even in the United Kingdom for its decadence. Some say that tax money should not be wasted in such a manner when the economy is still suffering.

While these critics have a point, the wedding will be an economic boon for the U.K. in the end. The event created great publicity for London during a period of financial hardship and will encourage tourism. The royal wedding also brought attention to Sarah Burton, who designed the bride’s dresses, and to merchants who make look-alike bridal accessories. According to one analysis, the economic effect of the wedding will amount to 1.7 billion pounds.

While the frugal royal wedding held under King Yeongjo and last week’s luxurious British wedding may look different, both hold at their heart the interests of their respective nations. Royal families enjoy many privileges that ordinary families do not and thus have an obligation to serve their people wisely. Last week’s wedding reveals that Queen Elizabeth understands that.