There were once just two options for animated feature film buffs in Korea: films from U.S. studios like Disney, Pixar and DreamWorks or movies from Japanese studios such as Studio Ghibli. That’s because in recent years, few animated Korean films have made it to the box office - the last ones to hit the big screen were “My Beautiful Girl, Mari” in 2001 and “Oseam” in 2002.

But there will be more animated films released from Korea this year when two features by Korean directors - “Leafie, A Hen into the Wild” and “Green Days” - are released this summer.

Shim Jae-myung, the head of Myung Films, which co-produced “Leafie, A Hen into the Wild” in conjunction with the local animation studio Odolttogi, discussed the film at a press conference on April 25 in central Seoul.

Appearing with Shim was Oh Sung-yoon, the film’s director, and the film’s stars - actors Choi Min-sik from “I Saw the Devil” (2010), Moon So-ri from “Forever the Moment” (2007) and up-and-coming teen actor Yu Seung-ho.

Based on a bestselling preteen novel of the same title that has sold more than 1 million copies in Korea, “Leafie, A Hen into the Wild” was nearly six years in the making, including a year of preproduction. 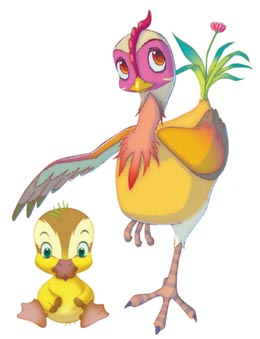 “Leafie, A Hen into the Wild” will be released in July. Provided by Myung Films

It’s a story about a hen named Leafie who is destined to live as a laying hen for her entire life. Her fate changes when she escapes from the chicken farm and hatches a duck egg. She then sets off on a journey into the wild with her new son, who believes Leafie is his mother.

Shim, who has produced some of the nation’s top grossing films, including “The Contact” (1997) and “JSA: Joint Security Area” (2000), said that it was her experience with major motion pictures that made her want to produce animated films that could compete with those from Hollywood and Japan.

“And as a woman and mother, the plot touched my heart,” she said.

When asked what they did to distinguish their film from films by the world’s major studios, Oh said he and the crew focused on making the visual effects as beautiful as possible.

“Most of my staff and I majored in painting, and we chose to make the film two-dimensional, so that the entire product looks like a beautiful picture,” Oh said. “In addition to that, we have many quality animators on staff who draw for Pixar and Disney in Korea.”

“Leafie” will hit local and Chinese theaters in July, but the exact release date has not yet been determined.

Meanwhile, another animated Korean feature called “Green Days” will be released in June. This film depicts the growing pains high school students face, including their struggles with romance.

The film, co-directed by Han Hye-jin and Ahn Jae-hun, will compete for the grand prize at the 2011 Annecy International Animated Film Festival in France, often dubbed the Cannes of the animated film industry.

Another animated Korean film, “The House,” will also compete at the festival, though it failed to impress moviegoers when it was released in March.

Park Bo-kyung, a manager at the Seoul Animation Center, said that this year is very meaningful for animated features from Korea because two films by Korean directors are coming out this summer.

When asked why animated Korean feature films have failed to succeed in the past, Park said it is a complex issue, but that the “biggest problem is with the nation’s broadcasting stations and their lukewarm attitude towards animated feature films.”

According to Park, just a couple of animated shorts, mainly for toddlers, are shown by major broadcasting stations because they are less lucrative than other programs.

“Except for ‘Pororo the Little Penguin,’ there have been few successful animated films from Korea,” Park said.

“Pororo the Little Penguin” is an animated program for toddlers created by Choi Jong-il and produced by Korean animation firm Iconix Entertainment. It is exported to as many as 100 countries overseas.

Jean G. Poulot, a professor of the Animation School of Art and Design at Konkuk University, recently criticized the Korean animated-feature-film industry in a column he writes for a local newspaper.

“Animated Korean films lack originality. Nobody is interested in a daughter who sacrifices her life for the sake of her father,” Poulot wrote, referring to the plot of the folktale Simcheong, which has been remade into countless films and plays.

“The animated-film industry in Korea wants recognition from international audiences, but animated films should contain humor, and that’s something that’s hard to find in Korean animated films,” Poulot wrote.

The Korean animated film industry is already facing competition from a series of movies from overseas slated to open later this month. DreamWorks’ “Kung Fu Panda 2” will be released on May 26; “Rio,” an animated film that takes place in Brazil and was a box office hit in North America, will be released July 28; and a three-dimensional version of “The Smurfs” will open on Aug. 4.