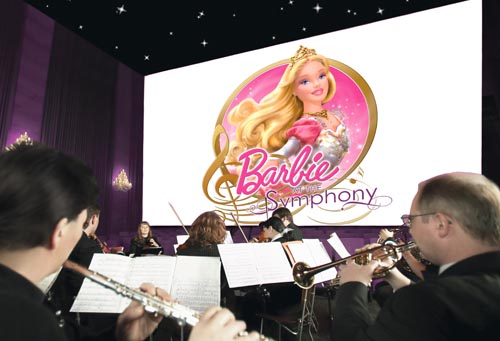 The Barbie Symphony, conducted by Grammy-winning conductor Arnold “Arnie” Roth, presents songs played in the Barbie movies. The concert takes place on Sunday at the Sejong Center for the Performing Arts’ Grand Theatre in central Seoul. See MUSIC. Provided by the Sejong Center


THE GREAT 3B SERIES: BRAHMS

This concert features pianist Sohn Yeol-eum, who won the silver medal at the 13th International Van Cliburn Piano Competition. She will be playing Brahms’ Piano Concerto No. 2 in B flat major and Symphony No. 2 in D major.

Her hit single “Love Song,” from her debut album “Little Voice,” went to No. 1 on the Billboard Pop 100 chart in 2008. The song was later nominated for Song of the Year and Best Female Pop Vocal Performance at the 51st Grammy Awards. Bareilles has also released two live-recorded albums, including the recent “Live from Soho.”

Sunday: Grammy-winning conductor Arnold “Arnie” Roth and Korea’s Ditto Orchestra present theme songs played in the Barbie movies. The program includes the theme song from “Barbie in the 12 Dancing Princesses” (2006) - Mendelssohn’s Symphony No. 4 in A, Op. 90 - and the theme from “Barbie and the Magic of Pegasus” (2005) - Beethoven’s Symphony No. 6, Op. 68, “Pastorale.”

May 16-18: Italian composer and conductor Ennio Moriccone celebrates the 50th anniversary of his debut.

Morriccone is considered one of the most prolific and influential film composers of his era. He is well-known for his long-term collaborations with internationally acclaimed directors such as Sergio Leone, Brian De Palma, Barry Levinson and Giuseppe Tornatore.

In Seoul, Morricone will perform with soprano Susanna Rigacci, who has performed in Korea twice, leading Italian pianist Gilda Butta, who has recorded many of Morricone’s songs, and other top musicians.

May 18: “Genius” 22-year old Russian pianist Lukas Geniusas was born into a family of musicians and began studying piano at the age of 5.

He won second prize at the International Chopin Piano Competition in Warsaw 2010. In 2007, he received the Moscow City Government’s award for Gifted Youth of the 21st Century.

The program includes Chopin’s 12 Etudes, Op. 10 and Tchaikovsky’s Concerto No. 1 for Piano and Orchestra in B flat minor, Op. 23.

May 19: The Seoul Philharmonic Orchestra presents the second concert in its Masterpiece Series, which features Argentinian pianist Nelson Goerner and Sung Shi-yeon, the orchestra’s vice conductor.

May 22: New York-based indie pop band The Drums will have its first concert in Seoul.

Founded in 2008 by former summer camp mates Jonathan Pierce and Jacob Graham, The Drums’ breezy pop melodies and lighthearted lyrics made them the Best Hope for 2010 in Pitchfork’s 2009 readers’ poll.

With an live show that grew out of a month-long stint at a New York club and songs like “Let’s Go Surfing,” “I Need Fun in My Life” and “I’ll Never Drop My Sword,” the lads are sure to entertain.

May 25: American pop-rock band Maroon 5 hit it big with the release of their first album “Songs About Jane” in 2002, but it took a while before songs like “Harder to Breathe,” “This Love,” “She Will Be Loved” and “Sunday Morning” propelled the album to the top 10 of the Billboard 200 in 2004.

The band has won three Grammy Awards, including one for Best New Artist in 2005, and just released a new album last September called “Hands All Over.”

May 18-29: Some of the best dance companies and choreographers from Korea and around the world gather to perform, give workshops and network with other dancers in the 30th edition of this annual festival hosted by the Contemporary Dance Association of Korea.

The festival opens with “Connected” - a sculptural, physically dynamic piece by the acclaimed Australian company Chunky Move - and continues with performances by a host of well-known international and domestic artists.

Other festival highlights include “Spark Place,” a showcase for emerging choreographers, as well as workshops and talks with visiting artists.

May 20-21: The Korea National Ballet presents “Converdance,” a show that brings together the talent of three esteemed choreographers. The first part features Jung Hyun-ok’s “Play,” the second is Ahn Sung-soo’s “Swing Time” and the last is Park Hwa-kyung’s “Digital Music.” The title is a portmanteau of “convergence” and “dance.”

May 27-29: Sugi Opera presents Giuseppe Verdi’s “La Traviata.” The three-act opera is a tragic love story about Violetta, a famed courtesan, and Alfred, her lover.

This is Italian soprano Mariella Devia’s first performance in Korea. Devia is well-known for her many roles in the bel canto repertoire.

The music will be performed by Nara Opera Choir and Prime Philarmonic Orchestra. Roberto Gianola conducts.

To May 29: Korea EMK Musical Company presents the classic story of Dorothy, Scarecrow, Tin Man, the Cowardly Lion, the Wicked Witch of the West and the Munchkins as they venture through the merry old land of Oz.

To May 29: Cirque du Soleil returns to Korea for the first time in three years with a new production, “Varekei,” which is based on the Greek myth of Icarus.

To Aug. 15: The first Korean-language performance of “Jekyll and Hyde” was in 2004. Since then, it has been a favorite with Korean audiences.

Cho Seung-woo and three other actors alternate in the title role.

The last part is “Venice Glass Fantasia” and shows 60 pieces of glass art by artists Schiavon and Pino Signoretto.