‘Source Code’ dazzles - up until the end

‘Source Code’ dazzles - up until the end 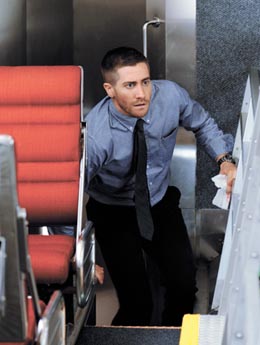 Duncan Jones’ first film, the mesmerizing, sci-fi character drama “Moon” from 2009, was a marvel of efficiency, tension and pacing. It signalled the arrival of an artist with an appreciation for the past but also with his own clear, unique voice, ready to leave a distinctive stamp on the culture. And it was the best movie of the year - according to this critic, at least.

“Source Code” represents his evolution as a director, now that he has a bigger cast and more expensive toys to play with. It’s swifter, glossier, more ambitious. And for a long time, it’s a thrilling and challenging puzzle based on a clever idea - until it pushes its central gimmick and gets too greedy at the end, that is.

It’ll make your brain hurt (in a good way) trying to determine whether it all makes sense - until it quite obviously and frustratingly doesn’t make sense anymore. It also aims for some emotional connections it doesn’t fully develop. Maybe we’re nitpicking needlessly, and should just let ourselves go with it. Still, it leaves you with the nagging sensation that this is a good film that could have been great, if only it had quit while it was ahead.

Based on a script by Ben Ripley, “Source Code” keeps us as consistently confused and off-guard from the start as its main character, U.S. Army Capt. Colter Stevens (Jake Gyllenhaal). And, to be fair to you, it’ll be tough to describe what happens here without giving the aforementioned fun-of-the-puzzle away. But we’ll try.

A decorated soldier from the battle in Afghanistan, Colter wakes up one morning, disoriented, on a commuter train heading toward Chicago. Across from him is a sweet and beautiful woman (Michelle Monaghan) whom he’s never seen before, yet she’s talking to him with the familiarity of a friend. He takes a quick glance at himself in the bathroom mirror and is startled to discover he’s in the body of another man, one he doesn’t know.

Within minutes, the train has blown up, killing everyone on board - but Colter suddenly finds himself still alive, strapped inside a crude metal pod, communicating by monitor with an Air Force captain (Vera Farmiga). She explains that he’s part of a special assignment called “Source Code,” designed to allow him to enter the body of another man for eight minutes. His task is to gain valuable information and hopefully prevent a later, larger terrorist attack.

And so Colter must go back and relive the same eight minutes over and over again, gleaning more details each time. Yes, this will probably remind you of “Groundhog Day,” but this is also where “Source Code” is at its most zippy and compelling - and, strangely, at its most plausible.

The supporting cast is strong down the line, including Jeffrey Wright as the coldly driven brains of the operation, and even in the choice of actors on the train who only get a couple of lines, but have significance with each eight-minute go-round.

The score is a little insistent and intrusive, especially compared to the gorgeous and haunting score from “Moon,” and Jones could have made more of an impact at times with silence. But we should probably quit while we’re ahead, too, and let you discover the secrets of “Source Code” for yourself - and decide whether they actually add up.

“Source Code” was released in Korea at theaters nationwide on May 4.