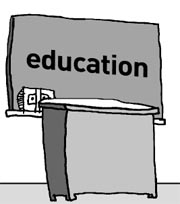 Money cannot make a family noble. A family is more highly regarded when its members lead honorable lives for generations.

The four noble families of the Joseon Dynasty were the Kim Sang-heon family of the Andong Kim clan, the Park Se-dang family of the Bannam Park clan, the Lee San-hae family of the Hansan Lee clan, and the Lee Jeong-gu family of the Yeonan Lee clan. These families enhanced the dignity and status of their clans with their loyalty, integrity, fidelity and literary talent.

Today, however, noble families with generations of history have nearly vanished. There are families with extraordinary wealth, and some families have produced a number of politicians and legal professionals. But I am not sure they deserve to be called “noble.”

How about calling a family with generations of teachers a “noble family of educators”? The Korean Federation of Teachers’ Associations has done just that. It is celebrating the 30th Teachers Appreciation Day by naming eight families “Noble Educators.” The new award honors families whose members have been teaching students for three generations.

These families have a combined total of 100 years in education. It is a significantly long period of time, and these families exude dignity and pride as educators. From early on, the children were inspired by parents who devoted themselves to education, and they chose the same career path. Members of these families truly meant it when they said, “Teaching is the family business,” and “I want to be a teacher if I were born again.”

A noble family respected by the community is not born overnight. The three generations of teachers are walking the path of educators together, and they are worthy of the title “Noble Educators” for their dignity and tradition.

The problem is that being a teacher is not easy in Korea. According to a survey by the Korean Federation of Teachers’ Associations, up to 80 percent of teachers feel that their satisfaction and morale as teachers have decreased. This is true of more and more teachers every year. In 2007, more than half of the teachers surveyed said they would recommend that their children choose a career in education. This year, only 28.8 percent said the same. I am worried that we will lose our families of noble educators. The country would suffer for it.