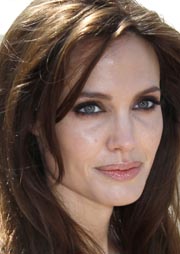 LOS ANGELES - Angelina Jolie’s directorial debut - a controversial movie set in wartime Bosnia - has a name and a release date.

“In the Land of Blood and Honey” will be released in the United States on Dec. 23, producers said in a statement on Monday, just in time for Oscar consideration.

“The film is specific to the Bosnian War but it’s also universal,” Jolie said in a statement. “I wanted to tell a story of how human relationships and behavior are deeply affected by living inside a war.”

Jolie, who also wrote the screenplay, last year described the then untitled movie as a love story between a Serbian man and a Bosnian woman on the eve of the 1992-95 Balkans conflict, in which 100,000 people died.

But it caused controversy in Bosnia with some female victims of sexual violence objecting to details in the plot and Bosnian authorities canceling a filming permit. As a result, some scenes scheduled to be shot in Sarajevo were moved to Budapest, Hungary.