No place for the law in lip-sync debate

No place for the law in lip-sync debate 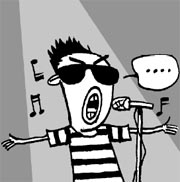 When celebrated Italian tenor Luciano Pavarotti appeared at the opening ceremony of the 2006 Winter Olympics in Turin, Italy, he sang “Nessun Dorma,” the famous aria from Giacomo Puccini’s “Turandot.” The following year, Pavarotti died from pancreatic cancer, and the Turin Olympics ended up being his last performance. But his perform was later tarnished by the revelation that the song had been lip-synched. Conductor Leone Magiera, who had worked with Pavarotti for years, revealed in his 2008 memoir “Pavarotti Up Close” that the great tenor was unable to perform because of his health.

Lip-synching is a innovative technique developed in the United States in the 1950s, when film and sound were produced separately. Since then, the development of recording and editing technologies has made lip-synching more sophisticated. Now it is a necessary part of animation, in which voice-overs have to be inserted. Lip-synching became more prevalent in the late 1980s as singers began performing complex choreography, and the Michael Jackson, who was known for his slick dance moves, was also known to lip-sync in his performances.

Today, singers who lack talent resort to lip-synching during live performances. Those who do this, instrumentalists included, have to have some musical skill in order to authentically mimic singing or playing. But it is hard not to think of them as puppets.

At the opening ceremony of the 2008 Beijing Olympic Games, a performance by a young girl impressed the world, but it was soon revealed that she had been lip-synching. It may have been an inevitable choice at a stadium lacking in acoustics. But the Chinese government felt it was an international disgrace. A law banning lip-synching was passed the following year and China is now the only country in the world where lip-synching is prohibited.

Last week, Lee Myung-soo of the Liberty Forward Party proposed a bill similar to the law in China, and his initiative has ignited a heated debate. Some argue that K-pop singers became famous thanks to lip-synching because it was their looks and dancing that propelled them to stardom rather than their singing ability.

For a musician, there is nothing more serious than the audience’s response. But no matter how prevalent lip-synching becomes, audiences can always sort the good singers from the merely good looking. The law does not have to get involved in popular culture.