A ‘Tower of Babel’ of books in Argentina

A ‘Tower of Babel’ of books in Argentina 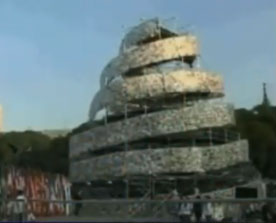 BUENOS AIRES - Marta Minujin, Argentina’s most famous artist, is known for artwork that is both out-sized and outlandish.

Her latest creation might also be described as vertigo-inducing - a spiraling, 25-meter-tall (82-foot) tower meant to pay homage to the written word.

In the Plaza San Martin, in the heart of the Argentine capital, Minujin has erected her latest work - “The Tower of Babel” - built from 30,000 books, most of them donations from some 50 embassies.

“I don’t know why we have to have different languages,” she says, adding that she sees her mission as an artist as being to “unite all people.”

Unlike the thousands of tomes that form the basis of this current massive sculpture, she told AFP that “art needs no translation”.

An “enfant terrible” of Argentina’s art world who has cavorted during her career with the likes of Andy Warhol and Christo, Minujin is a celebrity who has exhibited all over the world.

She has been a mainstay of the country’s avant-garde scene since the 1960s, famous for works that speak to the public’s artistic sensibility, while at the same time tickling its funny bone.

“It’s really amusing to be able to climb up and down a work of art,” said Minujin, graced with emblematic white-blonde hair and ever-present sunglasses.

The unveiling this week of the soaring structure is timed to coincide with the Buenos Aires Book Fair and the city’s role this year as the World Book Capital 2011, a designation conferred by the United Nations Educational, Scientific and Cultural Organization.

Minujin, a native of Buenos Aires, where she was born in 1943, still lives and works in the Argentine capital, and her artwork is inspired by the motto that “everything is art.”

Her latest work makes reference to an earlier piece of hers, an enormous “Parthenon” of books censured by Argentina’s dictatorship.

She can scarcely believe that she received funding for this latest piece, in which the books are mounted on an enormous metal spiraling scaffold. The books run the gamut from serious works of philosophy and children’s fairy tales to everything in between.

She is still exultant as she shows off the enormous sculpture, floor by floor and book by book - a work by Kafka in German, followed by texts in Japanese and in Russian, books of every size and color.

“Look, an anthology of French poetry!” she exclaimed, running up the spiraling stairs.

She notes that there is one part of the work that cannot be viewed from ground level: the breathtaking vistas of the cityscape. “Look at the view from this castle,” she exclaims.

Like much of her work, she said the “Tower of Babel” is meant to be not only imposing, but ephemeral. The entire structure is to be disassembled on May 28.

“No one will ever again have a view from this exact place,” she said.

Even when it’s gone however, the tower will have a lasting legacy - once taken apart, the books will form the basis of the first multilingual library in Buenos Aires.

“As of the 28th,” said Minujin as she surveyed the Buenos Aires vista, “the people will be able to keep these books.”