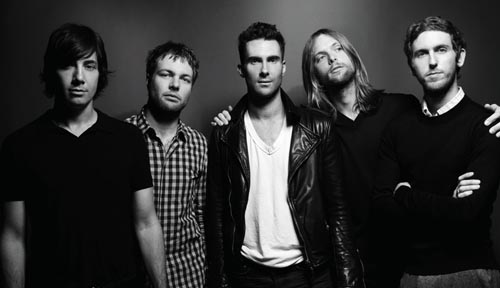 American pop-rock band Maroon 5, which hit it big with songs like “She Will Be Loved” from their hit 2002 album “Songs About Jane,” will perform on Wednesday at Olympic Gymnastics Arena in eastern Seoul. Provided by Hyundai Card

Sunday: New York-based indie pop band The Drums will have its first concert in Seoul.

Founded in 2008 by former summer camp mates Jonathan Pierce and Jacob Graham, The Drums’ breezy pop melodies and lighthearted lyrics made them the Best Hope for 2010 in Pitchfork’s 2009 readers’ poll.

With an live show that grew out of a month-long stint at a New York club and songs like “Let’s Go Surfing,” “I Need Fun in My Life” and “I’ll Never Drop My Sword,” the lads are sure to entertain.

May 25: American pop-rock band Maroon 5 hit it big with the release of their first album “Songs About Jane” in 2002, but it took a while before songs like “Harder to Breathe,” “This Love,” “She Will Be Loved” and “Sunday Morning” propelled the album to the top 10 of the Billboard 200 in 2004.

The band has won three Grammy Awards, including one for Best New Artist in 2005, and just released a new album last September called “Hands All Over.”

May 25: Swedish-Polish pianist Peter Jablonski is performing as part of the Seoul International Music Festival 2011. Jablonski worked with the Deutsches Symphonie-Orchester Berlin; the Philharmonia and Cleveland orchestras; and the Kirov, NHK Syphony and Czech Philharmonic orchestras.

May 26 and 28: Opera singer Youn Kwang-chul performs as part of The 5th Daewon Music Awards.

Youn made his debut with the Korean National Opera in Seoul in 1988 then moved to Berlin to study music in 1991. Since then, he has performed in over 50 operas on the international stage, including Verdi’s “Trovatore,” Wagner’s “Tristan und Isolde” and Donizetti’s “Lucia di Lammermoor.” He is one of the only Koreans working in Western opera houses.

On the 26th, he will perform pieces by Schumann and on the 28th he will sing Italian arias and works by Verdi, including “O Tu Palermo,” and “Tu Sul Labbro.”

May 27: Korean flautist Yoon Hye-ri was a member of the New York Philharmonic, Boston Symphony and other major orchestras before becoming a well-known musician in Korea.

At the concert, she will perform Claude-Paul Taffanel’s “Fantasie sur le Freyschutz,” Claude Debussy’s “Afternoon of a Faun,” and Arnold Schonberg’s Kammersymphonie in E, Op. 9.

May 28: American songwriter and romantic pianist Jim Brickman has been named the most charted male adult contemporary artist to date with six of his albums receiving gold and platinum status. He is known for his collaborations with artists such as Michael W. Smith (“Love of My Life”), Lady Antebellum (“Never Alone”) and Christian contemporary group Rush of Fools (“Never Far Away”), among others.

At the concert he will present songs from his 2008 album “Hope.” He is joined by guest vocalist John Tronse.

To May 29: Some of the most interesting dance companies and choreographers from Korea and around the world gather for the 30th edition of this annual festival hosted by the Contemporary Dance Association of Korea.

The festival opens with “Connected” - a sculptural, physically dynamic piece by the acclaimed Australian company Chunky Move, which seeks to redefine dance through theatrical, site-specific and multimedia works.

In addition to the cutting edge performances, other festival highlights include “Spark Place,” a showcase for emerging choreographers, as well as workshops and talks with visiting artists.

Friday and Saturday: The Korea National Ballet presents “Converdance,” which merges the talents of three esteemed choreographers, including Jung Hyun-ok’s “Play,” Ahn Sung-soo’s “Swing Time” and Park Hwa-kyung’s “Digital Music.” The title is a portmanteau of “convergence” and “dance.”

May 27 to 29: Sugi Opera presents Giuseppe Verdi’s “La Traviata.” The three-act opera is a tragic love story about Violetta, a famed courtesan, and Alfred, her lover. This is Italian soprano Mariella Devia’s first performance in Korea. Devia is well-known for her many roles in the bel canto repertoire. Roberto Gianola conducts Nara Opera Choir and Prime Philarmonic Orchestra.

To May 29: Korea EMK Musical Company presents the classic story of Dorothy, Scarecrow, Tin Man, the Cowardly Lion, the Wicked Witch of the West and the Munchkins as they venture through the merry old land of Oz.

To May 29: Cirque du Soleil returns to Korea for the first time in three years with a new production, “Varekei,” which is based on the Greek myth of Icarus.


THE SERIES OF THE MASTERPIECE OF KOREAN TRADITIONAL MUSIC

May 26 to 27: This series, presented by the Seoul Metropolitan Traditional Music Orchestra, explores the essence of traditional Korean music with performances by masters of various traditional musical forms.