Hundreds of pilots in drills

Hundreds of pilots in drills 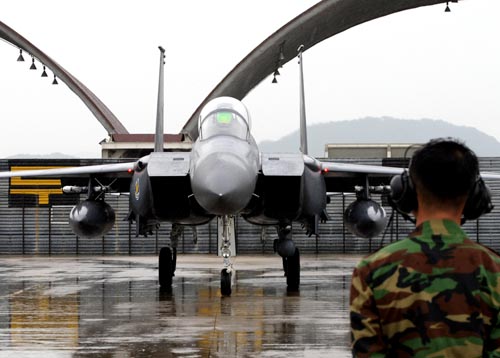 A Korean F-15K fighter jet prepares to take off from an airbase in Gwangju yesterday as the Korean and U.S. air forces launched a massive, regular joint exercise to sharpen their ability to work together in simulated war situations.

The annual Max Thunder exercise, which will run through Friday, involves about 60 warplanes, including a fleet of F-15K fighter jets from the South and F-16 fighters and Awacs surveillance planes from the U.S., the Korean Air Force said in a statement.

Some 300 pilots from the allies were mobilized for the drill over the southwestern airspace of the Korean Peninsula, Air Force officials said. [NEWSIS]