Hwaseong is the port of call for summer fun

Hwaseong is the port of call for summer fun

As the weather gets warmer, thoughts of ocean sunsets and salt air begin to creep into the brain. Too early to dive into the water and get a sun tan? Could be true, but that’s not the only thing that draws people to the ocean around this time of year, especially in Hwaseong, Gyeonggi, where the 2011 Korea International Boat Show is set to kick off from June 8 to 12.

This year’s event promises to be bigger than ever, with more free activities and displays. Nearby, there are other outdoor pleasures to keep you occupied, including an expedition to search for fossilized dinosaur eggs and a chance to try your hand at digging for clams.

For Seoul residents, Hwaseong is an excellent getaway that doesn’t require a long drive. The city is about 45 kilometers (28 miles) southwest from the nation’s capital, making for a comfortable day trip with family or friends.

Visitors cruise around in yachts as a part of a program at the Korea International Boat Show.

In Korea, boating has long been the domain of the wealthy, something that ordinary people could only access in the fictional realm of movies and television.

But starting June 8, people can ride in a luxurious boat for free at Jeongok Marina as a part of the 4th Korea International Boat Show. At the event, which runs until June 12, boats will go to Jebu Island, 30 minutes off the coast.

The boat show will also offer visitors a chance to ride in a cruise yacht, which can accommodate 15 people. The activity was last year’s most popular, according to event organizers. This year, the free event will be even bigger, offering a larger variety of watercraft. Boat show organizers said that visitors will be able to enjoy at least 48 boating activities, including canoeing, kayaking and ferry rides.

The boat show is expected to be crowded with thousands of people. According to event organizers, about 120,000 people visited the boat show last year, but more than 200,000 are expected this year.

The event will also showcase exhibitions by renowned boat makers and marine equipment manufacturers from around the world. A total of 352 local and overseas marine-related companies will participate in the event exhibition with displays of marine leisure gear, watercraft and engines. Event organizers said that the list of exhibition participants includes U.S. boat manufacturer Larson and Cobalt as well as French company Beneteau, the world’s fifth largest boat maker. Australia’s Bellingham Marine, the largest marina builder in the world, will also participate.

To accommodate the rising number of visitors and a growing demand for exhibitions, the showroom space has been expanded to 11,200 square meters (2.7 acres), which is 800 square meters larger than the previous year. According to organizers, there will be also 618 exhibition booths, 45 up from last year’s 573 booths.

Throughout the five-day boat show, there will be also various cultural events on offer, including a marine quiz show, b-boy dance competition and bubble art performances. Event organizers also said that a navy warship and photo exhibition will be on display as a memorial to the Cheonan warship that was allegedly sunk by a North Korean torpedo attack last year.

The Korea Match Cup 2011, a spin-off of the World Match Racing Tour that goes around nine countries, will kick off at the boat show. The professional sailing series is sanctioned by the International Sailing Federation and is considered one of the world’s three major boat races after America’s Cup and the Volvo Ocean Race.

A total of 12 racing teams from Korea, Sweden, France, Australia, the United Kingdom and Italy will compete for a prize of 330 million won ($301,783), the largest purse among any other World Match Racing Tour competition. The world class sailors will also be on hand for a picture-taking and autograph signing event.

The Korean International Boat Show originally started in 2008 as a business event to boost the recreational marine industry in Korea, but now aims to become a global hub for international water sports networks. The event is also expected to earn the certification next month of the International Federation of Boat Show Organizers.

Admission to the exhibition hall is 2,000 won ($1.80), but anyone who registers on the Web site (www.koreaboatshow.org) before June 11 will be admitted for free. The exhibition hall opens at 10 a.m. and closes at 6 p.m. throughout the event.

By car: Take the West Coast Highway, exit at the Bibong IC and then follow the signs to Jeongok Harbor.

Free parking is available and there is a free shuttle bus from the parking lot to the exhibition center.

The deck over the cogon grass field offers a clear view of the fossilized eggs lying around the site. By Kim Seong-ryong


An interesting place to visit near the boat show is Gojeong-ri in Hwaseong, which is known for its large number of fossilized dinosaur eggs.

Designated in 2000 as Natural Treasure No. 414, there are about 200 fossilized eggs and 30 nests at the site, which is known to have been formed about 100 million years ago. The fossilized shells range from 10 to 15 centimeters (4-6 inches) in size, while the nests are roughly about 50 to 60 centimeters in diameter.

Until 2009, it was difficult for visitors to explore the site at close range, but now there is a 1.5 kilometer-long deck for strolling.

Because it is difficult for people to find and distinguish the fossilized eggs on their own, the visitor’s center offers three organized tours a day. In addition to oval shaped and dark red-colored eggs, tour guides point out a wide range of plant fossils along the walk.

The other main feature of the site is the cogon grass field, which was formed after a land reclamation project in Sihwa Lake. Here, 50-centimeter long cogon grass covers a large 15.9 square kilometer (3,929 acre) field.

The best time to visit is from late May to June, when the white flowers are in full bloom.

By car: Take the West Coast Highway, exit at the Bibong IC and then take national road No. 313 in the direction of Jebu Island. From the Sagang intersection, transfer to national road No. 305, heading toward Gojeong-ri. It will take 10 minutes from there.

Play in the mud: Jonghyun Village 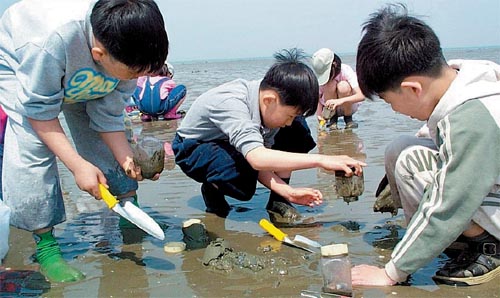 Kids dig for clams at a mud flat on Daebu Island. [JoongAng Ilbo]


Another interesting destination in the area is Jonghyun Village on Daebu Island, which is about 50 minutes away from the Hwaseong fossilized dinosaur egg site. The village, located in the center of the island, is renowned for its clean environment and friendly residents.

Hundreds of visitors flock here to dig for clams and ride mud sleds and tractors. Depending on the season, visitors can also enjoy leisure boats or sea rafting.

At low tide, a playground about 300 meters long opens along the sea wall. It is important to visit when the tide is ebbing. Low tide begins around 2 p.m. on the first and third weekends until the end of June.

The clam digging and mud sled and tractor rides are available as part of a package offered by local residents. The cost is 8,000 won ($7.35) for adults and 6,000 won for kids under 12.

In July, visitors can pick grapes and learn how to make tofu using sea water. For more information, call 032-886-5200 or visit http://ansandaebudo.co.kr.

By car: Take the Youngdong Highway, exit at the Wolgot IC and go in the direction of Sihwa industrial complex. Then cross the Sihwa sea wall to reach Daebu Island. Go 3 kilometers further from the island entrance and follow the signs to Jonghyun Village.

By bus: Take bus No. 123 at Ansan Station and get off at the Buk 8-tong stop. From Hwaseong, you can also take bus No. 717 at Sagang Terminal.