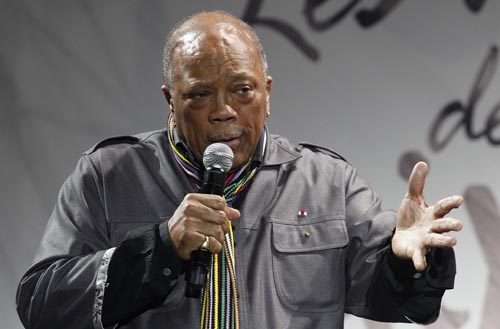 Quincy Jones, addresses the crowd during a concert for peace, part of the Mawazine World Rhythms Festival in Marrakesh, Morocco. [AP/YONHAP]


RABAT, Morocco - After a frenetic career as producer to Frank Sinatra, Ray Charles, Michael Jackson and many other music legends, 78-year-old Quincy Jones refuses to slow down and has just signed up for a new project in the Arab world.

“I’m 78 and I’ve still got a lot of energy and I want to do what my dreams are, which is to see people come together across the barriers,” Jones told Reuters in the Moroccan capital Rabat where he appeared in the Mawazine music festival.

He scoffs at a question about whether age and past medical woes, such as a serious cerebral aneurysm he suffered in 1974, might encourage him to ease up.

As a performer, Jones toured North Africa and other parts of the world in the 1950s with some of the biggest names of jazz including Lionel Hampton and Dizzy Gillespie.

He arranged Sinatra’s “Fly Me to the Moon” and produced Michael Jackson’s album “Thriller” and the 1985 “We are the World” recording for African famine relief.

Watching the star-studded 1990 documentary “Listen Up: The Lives of Quincy Jones” today, one is struck by how many of the legends linked to Jones have since died.

“Sinatra, Ray Charles, Billy Eckstine, Ella Fitzgerald - all gone,” Jones said before adding the name of film director Sidney Lumet and others. “How do you think I feel? I’ve lost 188 friends, man, in less than 15 years.”

Doctors have long told Jones to reduce his workload. “I know, I don’t care. I like what I am doing,” he said.

Like a master improviser able to draw on thousands of musical phrases, Jones, with the slightest association, is prepared to roll out a remarkable array of genial anecdotes about a lifetime of adventures with music legends.

A mention of Italy prompts him to show off his much cherished ring from Frank Sinatra. India sparks him to tell of meeting sitarist Ravi Shankar in 1956, after which he recalls that Shankar is father to singer Norah Jones.

A reference to Serbia inspires him to show off a few words in Serbian, including one off-color one that causes him much amusement.

In one of his latest projects, Jones, who has won 27 Grammy Awards, has launched a joint venture to promote music in North Africa and the Middle East in which musicians from different cultures will work together.

They are also recording a new song to raise funds for regional scholarships.

A musician from the besieged Libyan town of Misrata made a visit to Rabat this week for the project. On Sunday, Jones was also set to appear at a memorial concert in Marrakesh after an attack there killed 17 people a month ago.

“More and more when you get older you do exactly what you believe in with the people that you love and trust and admire,” he told Reuters. “That’s where I am now, which allows me to do what I feel and give back what I feel, whatever I want to do.”

Jones says he feels an affinity for Arabs as they have often suffered from prejudice like American blacks.

“People have preconceived concepts of you just on your appearance. That’s sad,” he said. “My two least favorite words are ‘you people.’ I hate that word.”