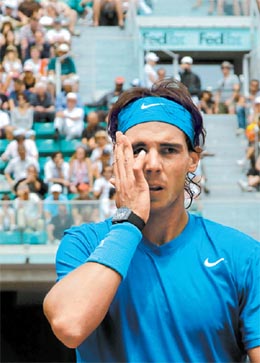 Nadal reacts during a match at the French Open tennis tournament, Paris on Monday. [REUTERS/YONHAP]

PARIS - Decoding Rafael Nadal’s self-evaluations can be a tricky proposition.

Listen, for example, to the way the top-seeded Nadal spoke about his game and mindset after handling 37th-ranked Ivan Ljubicic of Croatia 7-5, 6-3, 6-3 Monday to reach the quarterfinals at the French Open, improving his record there to 42-1 and getting closer to tying Bjorn Borg’s record of six championships in Paris.

Nadal chastised himself for being “too anxious.’’ He said he needs to “hit the ball with a little bit more conviction.’’ Looking at the big picture, Nadal insisted: “The thing is, you have to be [a] realist and today, I’m not playing well enough to win this tournament.’’

Maybe he’s playing possum. Maybe he’s being sincere. Or maybe - as explained by Toni Nadal, Rafael’s uncle and coach - this is just the way his nephew is.

“All his life, Rafael never had big, big confidence,’’ Toni said Monday. “He’s not a guy who thinks, ‘Oh, I am so good.’ Never. He tries to improve, he tries to play better, every day.’’

That’s because he’ll face No. 5 Robin Soderling of Sweden, the only man to defeat Nadal at the French Open, in the fourth round in 2009. It’s also a rematch of last year’s final, which Nadal won in straight sets.

Soderling had good things to say about his opponent.

“I think everybody knows what he can do. He won here so many times,’’ Soderling said, but added, “Every match is different. It doesn’t matter how you got to the quarters, as long as you’re there.’’

Novak Djokovic might say the same about how he got to the semifinals. The No. 2-seeded Serb’s quarterfinal opponent, Fabio Fognini of Italy, pulled out of the tournament Monday because he hurt a left leg muscle during his five-set win a day earlier.

That won’t count as a victory for Djokovic, so his winning streak stays at 43 matches overall - he’s 41-0 in 2011 - heading into what could be a semifinal against 16-time Grand Slam champion Roger Federer.