How to rid your clothes of that fishy smell

How to rid your clothes of that fishy smell 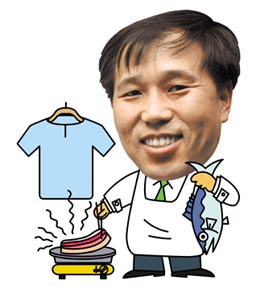 Around this time last year, the stench of cooking fish filled a room at a research center for LG washing machines.

A group of researchers began grilling mackerel, and it wasn’t even lunch hour. It didn’t take long for people to start asking questions: What’s that stench? Who would actually cook fish at work?

The mastermind behind the “mackerel-grilling incident” - as it was named - was Park Hye-yong, a chief researcher at LG Electronics.

He is also the leading man behind the company’s recent creation, Tromm Styler, a refrigerator-sized electronic wardrobe that dries, steams and sterilizes clothes. It enjoyed positive reviews when it debuted at the IFA consumer electronics show in Germany last August.

Park was grilling mackerel at work to research how to rid clothes of fish smells.

The 43-year-old did more than mackerel-grilling. For a period of time, after he and his colleagues had dinner at barbecue restaurants, he asked them to change and brought their clothes to his lab. And when he and his colleagues went to billiard halls, his interest was not in playing billiards, but in the clothes that were left with cigarette-smoke odors.

“Now that I think of those days, it is pretty embarrassing because everyone thought I was somewhat weird,” Park said.

But his hard work paid off, as the Tromm Styler made its debut this March in the Korean market.

It’s a pricey item, coming with a price tag of around 2 million won ($1,848). That’s why LG had originally aimed to sell just 7,000 units this year. But it has turned out to be a hit. In just two months since its release, the company has sold more than 4,000 units.

“We expect to sell about 30,000 units this year,” Park said, adding that he is encouraged by sales in Korea and plans to introduce the product in Taiwan this summer as well as in mainland China by the year’s end.

The idea came about in the mid-2000s, when fashion brands began to roll out items that couldn’t be washed in traditional machines. LG wanted to lessen the burden of having to go to the dry cleaners.

Park’s team, which consists of four developers, was formed in October 2006, and since then Park and his members have carried out all kinds of experiments.

“Getting rid of odors wasn’t as hard as getting rid of wrinkles,” Park recollected. He was inspired by housewives who shake the clothes they take out of the washer. He added such a motion; it took his team a year to conclude that 220 vibrations a minute was the optimal level that rids clothes of wrinkles without damaging the fabric.

Park also bought a lot of clothes for his research, so he could test different types of fabrics. Considering that the Tromm Styler is mostly for high-quality clothing, he bought things like luxury business suits and fur coats. He once tested the device on hanbok - traditional Korean clothing - that his wife had borrowed from an acquaintance.

“In the olden days, Koreans took a long bath, but only on occasions of major family functions. But now they take short showers on a daily basis,” Park said.

“Just like that, we think the Tromm Styler can change how people take care of their clothes,” Park added.