A nation is the sum of its heritage

A nation is the sum of its heritage 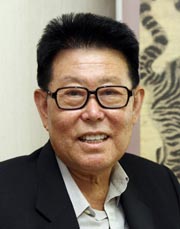 To find a nation’s identity, look no further than its historical relics and cultural heritage. For 50 years, Korea’s Cultural Heritage Administration (CHA) has preserved and maintained the country’s cultural remains.

And at the core of the foundation was Jung Jae-hoon, 73, a pioneering director of the Cultural Properties Administration (the former CHA), who witnessed some of Korea’s most important cultural discoveries.

The JoongAng Ilbo met with Jung to talk about where and how it all started and reflect on where Korea stands in preserving its cultural heritage.

Jung is currently teaching landscape architecture as the chair professor at the Korea National University of Cultural Heritage. But Jung is well-known for his active role restoring cultural heritage sites in the 1970s, mainly in Gyeongju, North Gyeongsang, the former capital of the Silla Dynasty (57 B.C. to A.D. 935).

One of Jung’s monumental excavations includes the Cheonmachong (Heavenly Horse Tomb), formerly known as Tomb No. 155, which is a tumulus of an unknown king from the Silla Dynasty. The tomb is famous for a painting of a mounted Korean Pegasus, the only surviving painting from the Silla era.

“When I first got into the Cultural Properties Administration in the 1960s, morning seminars used to be conducted in Japanese,” said Jung. “President Park and our generation had the obligation to root out the colonial view of our nation’s history that was still prevalent then.”

During the 1970s when Jung headed the Gyeongju Historic Site Administration Office, Park would frequently advise the expert to restore Gyeongju as a historical area rich with remains from the Silla Dynasty.

The president visited Gyeongju many times during his childhood, which influenced his later efforts to promote projects in the region.

“In 1973, when I excavated the Gold Dagger (National Treasure No. 635) from Gyerim-ro Tomb No. 14, the president said he wanted to see the relics for himself,” he said.

As Korea - then still poor - was undergoing industrialization and access to automobiles was more of a luxury, Gyeongju National Museum Director Park Il-hoon would often bring the relics to the president via bicycle.

“I told the president that the director of Gyeongju National Museum is who represents our nation, so he needed a fancier form of transportation,” said Jung. “Soon after, the president ordered to his chief economist to provide the museum with a car.”

Another interesting episode with the president was when Jung asked Park to stop giving instructions on the excavation site. “I made a joke that he should instead bring liquor or money to us when he comes,” said Jung.

But the president must have taken Jung seriously because when Jung excavated Cheonmachong Tomb in 1973, the president gave him a large sum of money. In fact, it was Park’s nonmilitary traits that showed his determination to re-establish Korea’s ethnic historical viewpoint free from the Japanese. Park respected the nation’s cultural heritage and even ordered ministers and vice ministers to take cultural heritage courses from Jung twice a week.

Jung was promoted to director of the Cultural Properties Administration in 1986 during the Chun Doo Hwan administration.

The first project Jung pushed forward as director was to uproot every inch of Japanese-style landscaping in five of the nation’s renowned palaces.

Among Jung’s initiatives, his most important - and controversial - was the demolition of the Japanese Government-General Building in front of Gyeongbok Palace.

“The project was approved by President Roh Tae-woo but was initiated only during the Kim Young-sam administration,” Jung said.

Re-establishing the culture of Baekje (18 B.C. to A.D. 660) - one of the Three Kingdoms - was one of President Roh Moo-hyun’s election pledges. Roh invested 64 billion won ($59 million) in the project and to develop the National Research Institute of Cultural Heritage in the southern cities of Buyeo, Mokpo, Changwon and Gyeongju.

“In order to adapt to the age of globalization, it is crucial to know your nation’s history and culture by preserving cultural heritage because it fundamentally represents who you are,” Jung said.