A second round for Andrew Salmon

A second round for Andrew Salmon 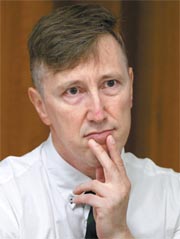 Two years ago, English journalist Andrew Salmon wrote a book about a forgotten battle in a forgotten war. In “To the Last Round,” Salmon detailed the gruesome, grizzly realities of war from a British perspective. His work won acclaim and the inaugural Hampshire Libraries Special Collections Award for best military book of 2009.

In the follow up, “Scorched Earth, Black Snow,” Salmon chronicles the Korean War from its start until New Year’s Day 1951, this time from the perspective of the 27th British Commonwealth Brigade and 41 Commando, Royal Marines.

It was a chance encounter with Sam Mercer, a member of “The Glorious Glosters” who enlisted himself at 17 and eventually found his way to Korea and ended up fighting “The Human Wave” of Chinese soldiers, that led Salmon to write his first Korean War book. The Glorious Glosters were destroyed at the Battle of Imjin River, in which the 4,000-strong British 29th Brigade held off 27,000 Chinese attackers. Belgian, U.S. and Philippine units also took part in the battle.

“Scorched Earth, Black Snow” follows the troops (which includes the Royal Australian Regiment, 3rd Battalion) and tells some of their stories. There are around 90 voices in the book and their experiences are retold in their own words. Other documents Salmon drew on include war diaries, after-action reports, notebooks and letters, and they all come together to tell of the horror of war.

One of the main reasons he wrote the initial book was that the soldiers who fought and died defending a country most of them had never heard of felt that their story was not only an untold one but that they were not given the credit and recognition their suffering and sacrifice deserves. The U.K. lost more men in Korea than in the Falklands, Iraq and Afghanistan conflicts combined, and while it is true that the U.S. suffered more causalities in just three months than in 10 years in Vietnam, their story has been told in print and on celluloid.

“Scorched Earth, Black Snow” casts new light on the most terrible months of Britain’s biggest, bloodiest and most brutal post-1945 war, and at the press conference for the book, Salmon gave a presentation of what the book will reveal. The Korean war was, in the words of Andrew Salmon “A gloves off war. There was no winning the hearts and minds of the people.”

The book tells about how British troops were enjoying themselves in Hong Kong a week before they were deployed to Korea. They were so uneducated about Korea that one soldier even asked his commanding officer if he should take his golf clubs and tennis racquet. Ignorant or not, one thing they had going for them was that they were “Fighting fit, not bullshit fit.” In writing his new book, Salmon has created an invaluable historical document that will tell their story forever more.