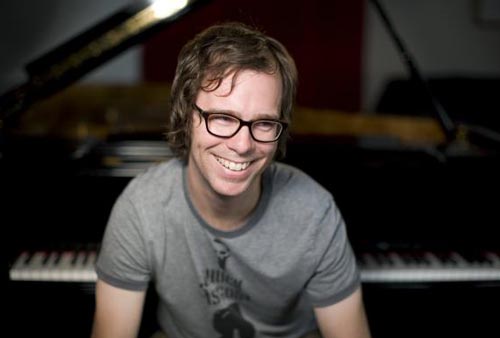 Ben Folds, the former frontman of the alternative rock band Bend Folds Five, will perform for the first time in Korea today at AX-Korea to promote his latest album, “Lonely Avenue” made in collaboration with English author Nick Hornby. See MUSIC. Provided by Private Curve

Today: Toro Y Moi is the stage name used by American recording artist Chazwick Bundick. The music is often characterized as chillwave, the synth-heavy sampled sounds that floated onto the music scene in the summer of 2009, but also borrows from hip-hop, alternative and other genres. The band has already received high praise for its first two albums, 2010’s “Causers of This” and the recent “Underneath the Pine.”

Today: American songwriter Ben Folds, the former frontman of the alternative rock band Ben Folds Five, comes to Korea to promote his latest album “Lonely Avenue,” which was made in collaboration with English author Nick Hornby.

For the album, Folds made the music to go with Hornby’s words. “Levi Johnston’s Blues” - which includes the lyrics “I’m a f****n’ redneck, I live to hang out with the boys, play some hockey, do some fishing, kill some moose .?.?. ” - is worth the ticket price alone perhaps.

As of 2008, Folds had released six solo LPs. As a solo artist, he has also contributed to many film soundtracks, including the 2006 animated comedy “Over the Hedge.”

Sunday: Vladimir Ovchinnikov performs in this concert, held in celebration of the 200th anniversary of Franz Liszt’s birth.

He appears regularly with major symphony orchestras, including the BBC Symphony, The Royal Scottish National Orchestra and the St. Petersburg Philharmonic Orchestra.

On Sunday, he will perform with Korea’s Millenium Symphony Orchestra.

June 18: German electronic musician and producer Siriusmo, who is also known as Moritz Friedrich, is bringing the party to Seoul. He has released a handful of albums over the years including “Diskoding,” “Allthegirls,” “MniRock” and the “Sirius” EP.

He said that he would not DJ or perform live again, but returned to mixing when he performed live on a radio show in 2010. After that, he was seen in a few prestigious German clubs performing live for the first time.

He will be in Korea to promote his latest album “Mosaik,” which was released in February.

The opening band will be Gogostar and the after party will be by D.J. Sonyeon.

June 19: Pianist Seo Ji-soo will give her first solo recital after finishing her doctorate of Musical Arts at the Eastman School of Music in Rochester, New York.

The winner of the top prize at the Brandshaw and Buono competition in New York in 2007, the Seoul National University graduate has been praised across the United States, Europe and in her home country for her poetic, powerful performances.

June 21: American singer and songwriter Halie Loren will give her first concert in Seoul.

Loren is the winner of the 2009 Just Plain Folks award for Best Vocal Jazz album for “They Oughta Write A Song” (2008).

The program includes hits such as “To Say Goodbye,” “Beyond the Sea” and “Summer Time.”

She will perform with the Halie Loren Band, which includes pianist Matt Treder, bassist Mark Schneider and drummer Brian West.

To Sunday: Seoul Players hosts this musical fundraiser featuring songs from “Rent,” “Wicked,” “Into the Woods” and other Broadway favorites. Half of the proceeds from each night will benefit a different charity, including Habitat for Humanity, The House of Sharing and Doctors Without Borders (Japan Relief).

Hue’s “This Is Your Life,” depicts the stories of several true-to-life individuals, including a wife who ignores her husband’s cheating, an unhappy business man, a hairstylist who makes all the ladies happy, and a woman who loves her handsome boyfriend, as does every other woman in town.

June 24 to July 9: Probationary Theatre presents “Some Girls” by Neil LaBute in its new venue, the first performance space dedicated to English-language productions in Seoul.

June 12 to 28: Korea’s four major ballet troupes have gathered to host the first government-led ballet festival. The state-run Korea National ballet, the private Universal Ballet Company, the private Seoul Ballet Theatre, and the Gwangju City Ballet will each stage their audience’s favorite repertoire featuring their star dancers during the two week-long festival. “Giselle,” “Life is...,” “Swan Lake,” and “Empress Myeonseong” are a few performances that are included in the festival.

June 23 to July 3: The Ditto Festival was started to make classical music accessible to the public. Its other goal is to promote 15 rising classical stars such as violinist Richard Yong-jae O’Neil, pianist Ji-yong, and pianist Hahn Bin.