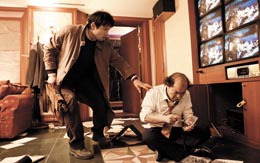 The title of this film may bring to mind Herman Melville’s classic novel, but “Mobydick” is actually a chilling voyage through Korean history with enough conspiracy theories to make even the most nationalistic viewer question their government.

When a mysterious explosion destroys the fictional Balam Bridge on the outskirts of Seoul, veteran journalist Lee Bang-woo (Hwang Jung-min) picks up the story and runs with it.

Around the same time, he gets a visit from his old friend Yoon-hyuk (Jin Goo), who offers some highly classified information on the case - that the explosion was no accident and that the government caused it.

Thinking the case is no ordinary job, Lee calls on his fellow reporters Sohn Jin-ki (Kim Sang-ho) and Seong Hyo-kwan (Kim Min-hee) to investigate. But when their investigation uncovers conspiracy after conspiracy, the group begins to question the government and they begin to get threats that could endanger their investigation and their lives.

With a highly esteemed cast of prestigious Korea actors, including Hwang, who is famous for his role in the 2009 film “Private Eye,” this movie is bound to raise some eyebrows and could be the harbinger of Korean films to come.

The X-Men movie franchise is back in play with the release of producer Bryan Singer’s and director Matthew Vaughn’s “X-Men: First Class.”

A prequel that explains the origins of how the mutants came to be, the new film has a formidable cast of characters led by James McAvoy as Charles Xavier (later Professor Charles Xavier) and Michael Fassbender as Erik Lehnsherr, the future Magneto.

The story introduces the audience to Xavier and Lehnsherr in the 1940s. Then they take part in a CIA operation in the 1960s to take down Sebastian Shaw, the main villain in “X-Men: First Class,” who is played by Kevin Bacon. The heart of the movie, though, is to explain how Xavier and Lehnsherr, who are friends in the movie, become estranged and choose opposing sides, laying the groundwork for the X-Men saga. 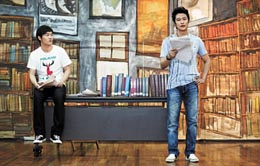 Musicals have hit Korea with a force that isn’t likely to fade, and that trend has now seeped into film as well.

“The Story of My Life” is a musical within a musical that centers on five men who are struggling to have a perfect life while preparing for a production of the upcoming musical “Wonderful Life.”

The five men gather together for the first reading of the script, and are intertwined together from then on in a socially dramatic and complicated knot.

Ryu Jung-han is an obsessive perfectionist; Lee Seok-joon is his rival; Shin Seong-rok is the loveable guy who provides comic relief; Lee Chang-yong is the youngest of the bunch and is intimidated by his older castmates.

Drama and trouble all too predictably ensues within the tense atmosphere of rehearsals, professional rivalries and personal challenges. Motives are questioned, as is friendship. But the real question is, can the seemingly disparate bunch pull off the performance of their lives?

The film was directed by Shin Chun-soo, a veteran musical producer who is making his cinematic debut. All of the actors are musical theater professionals and use their real names in the film. 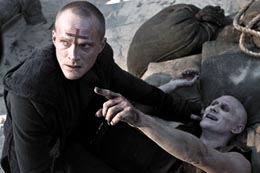 Based on the Korean comic of the same name, “Priest” takes some but not all details from Hyung Min-woo’s page turner.

The film, directed by Scott Stewart, stars Paul Bettany as Priest, a vampire-hunting warrior for a future version of the Roman Catholic Church, which is determined to win the war between humanity and those blood-sucking monsters.

When vampires kidnap Priest’s niece, he must work with his niece’s boyfriend and a former warrior priestess to get her back.

So while the film takes place in the future and pits people against vampires, the comic mostly uses the Crusades and the Wild West as backdrops and features demons and devils. The film version clearly departs from the popular source material, and it doesn’t seem like it was for the better.

Another popular vampire franchise, “Underworld,” seems surprisingly similar in design - dark and dingy - even though “Underworld” is more interested in the war between vampires and werewolves.

Even the reviews for “Priest” say strikingly similar things to what was said about the first “Underworld,” and that’s not a good thing.

If anything, it might be better to practice your Korean by picking up copies of the “Priest” comic. At least those are original.

Yet another comic book adaptation. Not that they are necessarily a bad thing. Some of them are, in fact, excellent, and some have even survived the curse of the franchise. There are wise cracks in “The Green Lantern,” as you would expect, but perhaps not as many as you might think. And the rock soundtrack, a la “Iron Man,” has been replaced with orchestral scores.

Set in a universe as vast as it is mysterious, a small but powerful force has existed for centuries. Protectors of peace and justice, they are called the Green Lantern Corps. They keep intergalactic order and each wears a ring that grants him (or her) superpowers. Thankfully a baddie called Parallax comes and destroys the status quo and threatens to destroy the balance of power in the universe. For reasons that may or may not be come clean when you watch the film, their fate, and the fate of Earth, lie in the hands of their newest recruit, the first human ever selected: Hal Jordan (Ryan Reynolds).

Hal, according to an attractive woman in the film, has the ability to overcome fear and is told by a disembodied voice in the trailer that “If you die, innocent lives will be lost. Your world will be annihilated.” I suspect things work out for Hal and humanity but you will have to go and see for yourself. 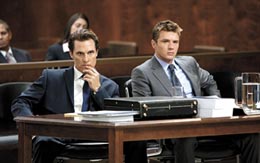 Matthew McConaughey keeps his abs to himself this time around in “The Lincoln Lawyer,” a thriller based on Michael Connelly’s best-selling book.

A defense attorney who is willing to work for the even most questionable clients, McConaughey’s Mick Haller works out of his chauffeured Lincoln Town Car.

Haller is soon presented with a case of a lifetime: Louis Roulet (played by Ryan Phillippe) is rich, handsome and stands accused of rape and attempted murder.

McConaughey’s character dives right in, hunting potential leads with the help of an investigator (William H. Macy’s Frank Levin) and navigating through life a divorced father. His ex-wife, Marisa Tomei’s Maggie McPherson, is a prosecutor.

But Haller soon realizes that perhaps no amount of money could have justified taking Roulet’s case - one that is potentially life-threatening to a lawyer who had no moral compass.

“The Lincoln Lawyer” is directed by Brad Furman and written by John Romano.