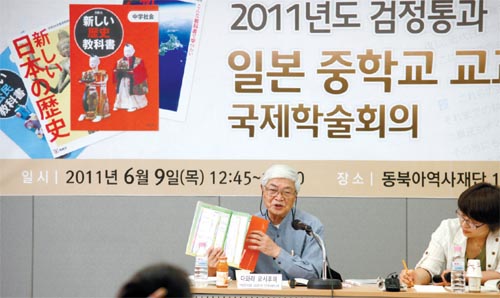 
When the Japanese government announced that it had approved new textbooks for middle school students at the end of March, it sent a ripple through Korea.

All 12 of the 18 new textbooks approved by the government stated that Dokdo, the islets in the East Sea that Japan refers to as Takeshima, were Japanese territory, but contained much stronger wording on the subject than before.

In response, scholars in Korea denounced the move and renewed their study of the textbooks and the history surrounding the dispute, most recently through a conference by the Northeast Asian History Foundation.

The conference, called the 2011 International Conference on Japanese Government-authorized Middle School Textbooks, was held yesterday at its office in Seodaemun District, northwestern Seoul.

At the conference, scholars discussed the contents of the textbook as well as how Korea should respond to Japan’s recent claim over the islands.

Scholars began by noting that schools have not yet chosen what textbooks they are going to use. Schools have until the end of August to decide on the teaching material.

“Even though textbooks with distorted information have been approved by the education ministry, there will be no need to worry if teachers don’t choose the textbooks,” said Yoshifumi Tawara, secretary general of Children and Textbooks Japan Network21.

“I think the Japanese need to make this year the last year that history is stained with politics,” said Yoshifumi.

Many Korean historians said that Korean history in Japanese textbooks needs to be modified along with the Dokdo issue.

For example, Lee Jae-suk of the Northeast Asian History Foundation said the textbooks incorrectly state that Balhae (698-926), successor to the Goguryeo Dynasty (37 BC-668), is part of China’s Tang Dynasty (618-907).

According to Lee, the textbooks also belittle the Joseon Dynasty (1392-1897) by calling it “Lee’s Joseon,” in reference to the dynasty’s founding family.