Javelin thrower aims for a place at Worlds

Javelin thrower aims for a place at Worlds 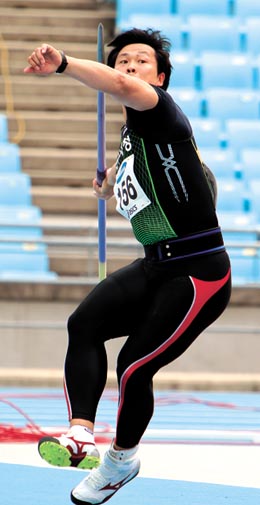 Park Jae-myong throws during the men’s javelin finals at the 65th National Athletics Championships in Daegu on June 9. [YONHAP]

In Korea, track and field gets short shrift in sports. Few athletes within its ranks have competed at the international level and there are few stars to draw crowds.

But Park Jae-myong stands out. He is the No. 1 javelin thrower in the nation and the current domestic record holder, with a record of 83.99 meters set in 2004.

With Korea preparing to host the upcoming IAAF World Championships in Daegu this summer, all eyes are on Park to see if he can repeat his record and boost Korea’s reputation in track and field.

Last Thursday, Park went a long way toward reaching that goal when he finished first at the 65th National Athletics Championships.

Yet his place on the Worlds roster has yet to be confirmed and his recent win has left many wondering if he will be able to hold on to his place at the top after a career that has been filled with ups and downs.

Park’s career got off to a promising start in 2002, when he became the first Korean athlete to throw more than 80 meters. Two years later, he set the Korean record at the New Zealand Athletic Championships in 2004 at the age of 23.

In what would become a pattern of great success and dismal failure, however, Park flamed out at the 2004 Athens Olympics, finishing 29th with a throw of just 72.70 meters. His performance in domestic competitions began to slip, and he eventually lost his place on the national team.

Then Park met Esa Utriainen, a Finnish javelin coach who had led his team to the gold medal in the 1987 World Championships and the 1988 Olympics. With Utriainen as his coach, Park recovered his form and won the only gold medal for the Korean track and field team at the 2006 Doha Asian Games.

The win put him back in the spotlight. His personal life began to come together as well. He married his longtime girlfriend Lee Hyun-jin in 2007, and the couple had their first child the following year. The same year, Park again dominated athletic championships in Korea.

But he hit another wall at the international level when he landed in 17th place with a disappointing throw of 76.63 meters at the 2008 Beijing Olympics. And things didn’t get much better the following year. He threw 78.16 meters at the 2009 Worlds but failed to get past the qualification stage.

Last November, Park made yet another comeback at the Asian Games with a throw of 79.92 meters that earned him a silver medal behind Japan’s Yukifumi Murakami, boosting his confidence.

Park’s first-place finish last week at the National Athletics Championships signaled a return to form, yet the 77.91-meter throw was somewhat disappointing for him since he would need better results to earn a place at Worlds.

Park earned his “B” standard ranking last year at the Asian Games, but he is now looking to qualify for the “A” standard to secure his place on the team and give the “B” standard spot to other Korean javelin throwers such as Jung Sang-jin, whose personal best is 80.89 meters.

Last week, the Korea JoongAng Daily met Park at a coffee shop near the Korea National Training Center in Taereung, Nowon District, northeastern Seoul, and talked with him about what he is doing to prepare for the event.


Q. How do you feel about your performance last Thursday? 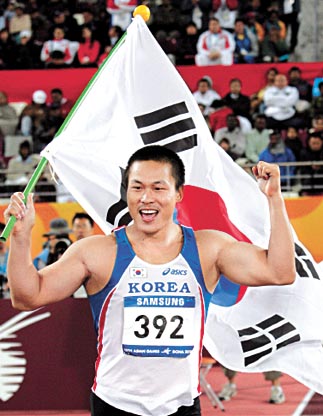 Park Jae-myong celebrates after winning the gold medal in the men’s javelin at the Doha Asian Games on Dec. 12, 2006. [YONHAP]

A. Although I tried my best, I’m still a bit disappointed. But I know I can still achieve a good performance like I’ve done in the past. There are still many events left until the [Aug. 15] deadline. I’m planning to compete in three or more events and qualify for the “A” standard ranking.

Some say that your current performance is not what it used to be. How would you respond to that?

It’s true that my performance isn’t the same as in the past. But these days, it is more consistent, and my overall average is actually higher. I’m not having dramatic ups-and-downs like in the old days and I think that’s the positive thing.

If Jung Sang-jin qualifies for a “B” standard ranking, the Korea Association of Athletic Federation said he will go to Worlds. Are you concerned that he may get the spot instead of you?

No. There is no pressure or enmity between us. He’s a good teammate and a good athlete. If he goes to Worlds, it’s good for him. But we can both go to Worlds if we qualify for the “A” standard ranking. I will try to get the “A” standard. I want to see both of us compete at Worlds because it would be better for me and for the national team.

If you get to Worlds, what is your goal for the tournament?

I’ll try to get to the finals. My real goal is to beat my own personal record. If I can do that, I believe I may have a shot at a medal.

How are you preparing to achieve your goal?

Actually, this year I started training late. But I’m slowly getting back into shape. I’m not doing anything special, just trying to maintain my condition. I can’t guarantee that I’m in better shape than in the past, but I do have experience and that will guide me through the tournament. I’m confident that I can break my personal record.

Moon Dong-hoo, the vice president of the Daegu Organizing Committee, chose you as an athlete to watch. What do you think about that?

I know people are thinking that five to eight Korean athletes can qualify for the finals at Worlds, and I think that I’ll be among them. Also, I think people are paying more attention to me because I’ve said this could be my last competition with the national team.

Will the Worlds be your last tournament for Korea?

I can’t say that I’m going to finish my athletic career, but it is likely that I’ll end my career with the national team after this summer. I’ve spent too much time in Taereung and now I want to spend some time with my family. My son was born two months ago and I haven’t seen him much.

If Worlds is your last competition for Korea, do you think you’re at the pinnacle of your career? Or was that in 2004 when you set the new Korean record?

I don’t think I was at my best in 2004, even though I set the record that year. In fact, with my experience and the skills I’ve learned, I think this is the right time to show what I can do. After 2004, even I was skeptical that I could throw better than my personal best, but now I’m confident that I can break that record at any time.

Many people think of you as the athlete who advanced Korean track and field. What do you think about that?

Aside from winning medals at the Asian Games and international competitions, I’m proud that I was the first Korean to break the 80-meter wall. I think I opened the door for other young javelin throwers and showed them that they can compete against the best athletes in the world. I’d be happy to see more young athletes do well at the international level.

After you won the gold at the 2006 Asian Games, you became a celebrity but soon afterward you disappeared from the spotlight. Do you envy other professional athletes such as football or baseball players for their popularity?

If I were more handsome, I think I would be popular for a longer time. (Laughs). But as we athletes say, “If you get the gold at the Olympics, you’re popular for a month, and if you win gold at the Asian Games, you’re popular for a week,” and I think that’s true. If track and field athletes had the same level of training that figure skater Kim Yu-na and swimmer Park Tae-hwan have, we would have produced a star athlete, too. I hope the Daegu World Championships will be a catalyst for track and field and help produce star athletes.

Do you think you’ll coach after your retire?

I’m preparing for a coaching career, but I can’t say that I’ll definitely coach. I’m now studying for a doctoral degree in kinesiology.

You’ve participated in many events in your career. What were your most memorable and most forgettable events?

My most memorable event was the 2006 Asian Games when I took home the gold medal. As for the most forgettable event, there are lots of them. But if I had to pick one, I’d choose the 2004 Olympics. It was the most difficult time for me. I got a lot of attention from fans and the media, but I failed to pass the qualifying stage that year. I almost quit the javelin throw after that tournament.

What does javelin throwing mean to you?