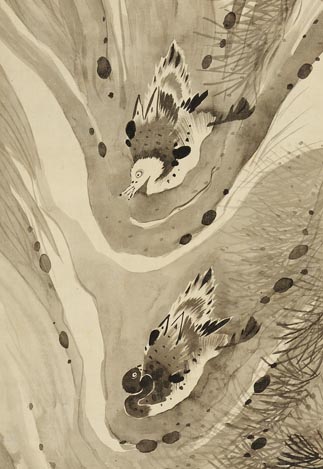 Hong Se-seop (1832-1884), a scholar-painter, is said to have excelled in paintings of birds and animals. These two hanging scrolls, together with six others, originally seem to have formed an eight-panel screen. In the screen, Hong depicted pairs of ducks, herons, ibis, geese and magpies among reeds, water plants, lowering plums and bamboo. It seems that the birds and their backgrounds were paired to represent the four seasons. Although these same birds have often been featured in traditional Korean paintings of birds and animals, Hong’s use of the boneless method - doing away with outlines or painting the background with ink while leaving the object white - appears new and refreshing. His bold representation of the swiftly flowing water in which the ducks are swimming aptly displays the new sensibilities evident in the last phase of Joseon painting.