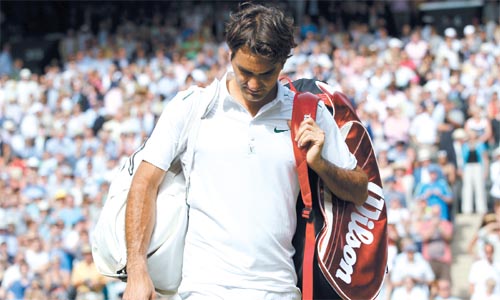 Switzerland’s Roger Federer leaves the court after being defeated by France’s Jo-Wilfried Tsonga in their Wimbledon Championships quarterfinal match in London, Wednesday. [AP/YONHAP]


LONDON - For two superb sets Wednesday, everything looked so routine for Roger Federer, precisely the way it did for so many years at Wimbledon - and nearly everywhere else, too.

Little comes easily for Federer anymore, even at the All England Club, where he’s won six of his record 16 major championships.

Facing a younger, quicker and better-serving opponent, Federer failed to make his big lead stand up and lost 3-6, 6-7 (3), 6-4, 6-4, 6-4 to 12th-seeded Jo-Wilfried Tsonga of France in the quarterfinals. Federer leaves Wimbledon in that round for the second consecutive year, after reaching seven finals in a row from 2003-09. 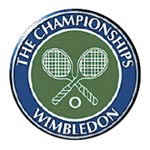 Nevertheless, Federer sounded defiant in defeat, saying he played well and is sure he “definitely can’’ add to his Grand Slam collection, even though he’ll turn 30 in August.

“When I was 20, I would have been crushed: ‘I can’t go on; I’ll never get another chance to be in a quarterfinal of a Grand Slam.’ But today, I know that I should probably have lots more,’’ said Federer, who lost in the French Open final earlier this month. “I don’t have that mental stress. I know what I’ve accomplished already. It’s different when you’re older and you’ve accomplished as much as I have.’’

Federer’s loss prevented the 125th edition of Wimbledon from being the first since 1995 with the four top men in the semifinals.

The other favorites all won Wednesday, though not without some difficulty: No. 1 Rafael Nadal numbed his injured left foot with a painkilling injection then beat No. 10 Mardy Fish of the United States 6-3, 6-3, 5-7, 6-4; No. 2 Novak Djokovic was a break down in the third set but reeled off seven games in a row to get past 18-year-old qualifier Bernard Tomic of Australia 6-2, 3-6, 6-3, 7-5; and No. 4 Andy Murray pulled up awkwardly after tweaking his hip changing directions on one third-set point but otherwise breezed past unseeded Feliciano Lopez of Spain 6-3, 6-4, 6-4.

“There are other players that are able to play great tennis and Tsonga has proved it today,’’ said Djokovic, who would replace Nadal at No. 1 in the ATP rankings by reaching the final. “It’s all very close at this level, especially in the second week of a Grand Slam.’’

In Friday’s semifinals, Tsonga will face Djokovic, who is 46-1 in 2011, the only loss coming to Federer at the French Open. Defending champion Nadal will play Murray, who hopes to give Britain its first men’s title at the All England Club in 75 years.

Although Fish thought Nadal moved well against him and showed no sign of injury, Nadal, the 10-time major champion said: “My foot is not fine. But we are in quarterfinals of Wimbledon. It’s an emergency, so I had to play.’’

Nadal is on a 19-match winning streak at the grass-court Grand Slam, and is 31-2 since the start of the 2006 tournament; both losses were against Federer in finals.